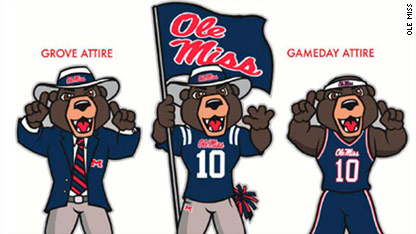 The committeeâ€™s website notes that the stories about Mississippiâ€™s black bear â€śhave been shared for generations,â€ť and that novelist and Mississippi native William Faulkner wrote a story called â€śThe Bear,â€ť in which the bear Old Ben â€śstands as a symbol of pride, strength and toughness.â€ť

The school always insisted it would keep the Rebels nickname â€“ and that name inspired the well-publicized effort by some students to draft Ackbar, the squid-faced leader of the Rebel Alliance in â€śStar Wars VI: The Return of the Jedi.â€ť

But not everyone was sold on Ackbar representing Ole Miss, including, reportedly, Lucasfilm. Ackbar wasnâ€™t even one of the final 11 choices put forward by the committee this summer.

Mississippi isnâ€™t the only SEC school celebrating a mascot succession. The University of Georgia is expected to introduce its latest bulldog mascot, Uga VIII, before the Georgia-Vanderbilt football game on Saturday in Athens, Georgia.

While Mississippiâ€™s bear will be someone in a costume, the Ugas of Georgia are real bulldogs. Uga VIII replaces Uga VII, which died last year.

3:46 pm ET September 20, 2021 RETWEET
While the tropics continue to pump out storms, the US coast has been spared during the last week. cnn.it/3tXGpUP
cnni