What's next for Chile miners, Fenix, 'Super Mario' and mine? 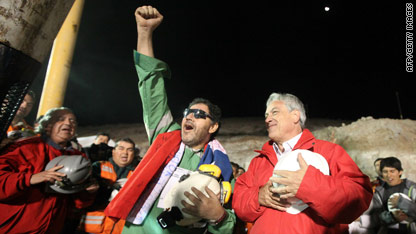 The whole world watched as rescue workers pulled 33 men out of a mine near Copiapo, Chile, after they had been trapped underground for more than two months.

While all 33 men are safe above ground, the story out of Chile is far from over. From the likely legal battle stemming from the initial mine collapse to those who have emerged as key figures, plenty lies ahead.

So, you're asking, what's to become of the miners, "Super Mario," the Fenix 2 capsule and the mine itself?

Life is about to change tremendously for the 33 men who spent 69 days trapped. They've gone from unknown miners to national heroes. They were lucky to walk out of the mine unharmed, but some are dealing with lingering medical issues. Many experts have said the miners will face psychological struggles similar to post-traumatic stress disorder issues that troops face after war.

The miners and their families also will deal with the glaring spotlight and myriad offers for book and movie deals. The men have reportedly made a pact to write a book jointly and share in the profits. They also likely will find themselves receiving more gifts.

So far, they've reportedly been given or will soon get: wraparound Oakley sunglasses (the ones they wore during the rescue), a trip to Greece, $10,000 each from a businessman, new iPods directly from Apple chief Steve Jobs and trips to see Manchester United and Real Madrid soccer games. Edison Pena, a die-hard Elvis Presley fan who led his fellow miners in Elvis singalongs to pass time while awaiting their rescue, has been given an all-expense paid trip to Graceland.

Then, there's the issue of the collapse. The miners are expected to speak to attorneys about a lawsuit against their employer. As to whether they will work in a mine again, some have said they are miners and that's what they'll continue to do. Some of the men's wives have different designs and are vowing to never allow them inside a mine again.

There are conflicting reports on what may become of the gold and copper mine that imprisoned the 33 miners.

According to Voice of America, Chilean President Sebastian Pinera said there would be a full investigation into the mine and that  it would be shut down to inspect security features. He further said the mine would remain closed until managers could guarantee miners’ safety, and officials would try to find alternative work for the miners affected by the shutdown, VOA reported.

Bloomberg reported that Pinera said the mine would be converted into a national monument to give hope to future generations.

However, as CNN reported, Pinera placed a cap on the mine after the rescue, and several news outlets, including The Associated Press, are quoting the president as saying, “This mine will definitely never open again.”

The conflicting reports were all published Wednesday.

Chile and its president

Chile and its president pulled off one of the most impressive feats of human rescue ever - one that has sparked an outpouring of national pride for the country and its leader.

Late last winter, Chile was recovering from a devastating 8.8-magnitude earthquake in February and subsequent looting that drew military police into the streets. August's mine collapse not only threatened the 33 men inside the San Jose mine, but it tested the South American country's psyche weeks ahead of its bicentennial commemoration.

For many, it could be said, Chile needed a win. Wednesday, it got one.

Pinera pledged to be there for all of the 33 miners, and indeed, he hugged every one of them as they surfaced. He also could be found chatting and chanting alongside all the workers as each man was rescued.

He gave impassioned speeches, and is continuing to praise Chile's success, saying that the mission helped show the world Chile's spirit and capabilities. Already one of Chile's richest men, Pinera is continuing to visit miners, adding to his recognition, and perhaps political capital, which has seen a surge since the rescue operation got under way.

The 40-year-old miner is only that, he said, and no more.

Sepulveda said his time trapped 2,300 feet beneath the earth has instilled in him a desire to become a “new person,” and he “learned a lot of wonderful lessons about taking the good path in life.”

However, that path likely will take him back to a mine, he said, shunning the celebrity that comes with his internationally televised plight and rescue that involved a slew of high-fives and handing out of rocks from the mine.

His comments in London’s Daily Mirror were more pointed: “I will continue working because this is my faith.”

One expert says this might be a tough ambition, even for a man who has demonstrated tremendous resilience and the patience of Job.

“It's a great problem for regular people who are subjected to intense publicity and focus,” said Leo Braudy, author of “The Frenzy of Renown: Fame and Its History.”

“They're lionized; and for some of them, it destroyed them," he said, referring to a paramedic who rescued baby Jessica McClure from a Texas well took his life years later.

The mythical firebird that rose from the ashes could not have provided a more appropriate moniker for the rescue capsule. As the NASA-designed, Chilean navy-built capsule was pulled up each time, it was literally Fenix rising.

After watching the capsule deliver each man to safety, many are wondering what will become of the (now slightly battered from dozens of round trips beneath the earth) capsule painted in Chile's national colors?

On the Web and in office break rooms, many seem to think a museum would be a fitting end for the rescue vehicle, but nobody seems to know for sure.

We'll concede there are probably better things to worry about right now.