At least three people were killed and four others injured in an overnight shooting in Los Angeles, a spokesperson fā€twitter.com/i/web/status/1ā€¦5C

RT @CNN: Two deputies with the Shelby County Sheriffā€™s Office have been put on leave pending an investigation after the sheriff viewed theā€¦

Brutal footage appears to show officers hitting Tyre Nichols while his hands are restrained, striking him at leastā€twitter.com/i/web/status/1ā€¦cs 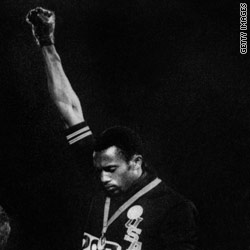 The Olympic athlete known for symbolizing Black Power on the podium at the 1968 games in Mexico City, Mexico, has placed his gold medal up for auction. Tommie Smith, now a 66-year-old resident of Georgia, has hired M.I.T. Memorabilia to handle the auction, which will close November 4, according to KTLA-Los Angeles. The asking price is $250,000.

Smith, a former San Jose State University sprinter, won the gold for the 200 meters in Mexico City. Teammate John Carlos also placed. During the U.S. national anthem, the two raised black-gloved fists and bowed their heads. Though they were kicked out of the Olympic Village at the time, they eventually earned international acclaim.

Chandra Levyā€™s disappearance near Washingtonā€™s Rock Creek Park in 2001 was the hot story that summer. This Monday, Guandique, a Salvadorian immigrant charged with her murder, will stand trial.

The investigation initially focused on then-U.S. Rep. Gary Condit of California. Condit, in his mid-50s at the time, was having an affair with the 24-year-old.

Levyā€™s mother Susan will be permitted to attend the entire trial even though she is a potential witness.

The Washington Post: Excerpt from the book 'Finding Chandra'