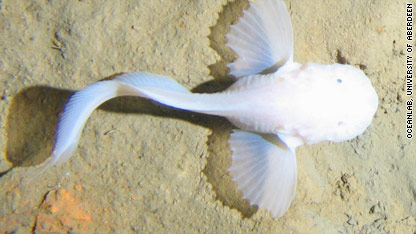 “Our findings, which revealed diverse and abundant species at depths previously thought to be void of fish, will prompt a rethink into marine populations at extreme depths,” said Jamieson, who led researchers from Japan and New Zealand in the project.

The most recent mission – August 31 to September 20 - was the seventh in three years by a collaborative research project among the University of Aberdeen’s Oceanlab, the University of Tokyo’s Ocean Research Institute and New Zealand’s National Institute of Water and Atmospheric research.

“To test whether these species would be found in all trenches, we repeated our experiments on the other side of the Pacific Ocean off Peru and Chile, some 6,000 miles from our last observations,” Jamieson said. “What we found was that indeed there was another unique species of snailfish living at 7,000 meters — entirely new to science, which had never been caught or seen before.”

Jamieson said scientists also observed cusk-eels in a “feeding frenzy that last 22 hours” and large shrimp-like crustacean scavengers in abundance in the trench.

“It begs the question of why and how they can live so deep in this trench but not in any other,” said Niamh Kilgallen, an expert on the creatures at the New Zealand institute.

“These findings prompt a re-evaluation of the diversity and abundance of life at extreme depths," Jamieson said.