About a dozen or so of the 33 miners freed in Chile this week after spending more than two months underground returned Sunday to the mouth of the mine to offer thanks during a private Mass.

For many of the miners, it was the first time back since their dramatic Wednesday rescue that was watched by the world.

Just the miners, their families and a handful of local officials were invited to attend the service.

Police in Pasadena, California, issued an Amber Alert on Sunday for a missing 3-year-old boy.

The child was reported missing Sunday morning by the boy's mother, police said in a news release. The boy, identified as Dylan Kurihara, was last seen with his father at 9:30 p.m. Saturday leaving a "parking structure" in a 2001 silver Lexus RX 300, the release said.

Upon investigation, authorities discovered that the father was arrested an hour later Saturday night for public intoxication. 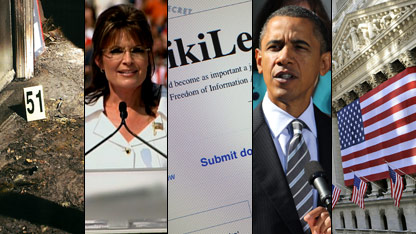 Preparation. It’s key to a successful life. Doing what you can to anticipate what's around the corner can help you step more confidently into the future. While meticulous preparation doesn’t always guarantee success, it gives you a better chance of feeling like these guys at the end of the day.

It's in that spirit that we introduce this new Sunday feature. In it, we hope to show you some of the things we expect to cover in the next week so you’ll feel up to speed as you wind down your weekend and prepare for your many dinner table and water cooler conversations ahead.

A few things to expect this week:

The Philippines is bracing for Super Typhoon Megi, a monster of a storm that is expected to make landfall with winds of more than 125 mph possible around midday Monday. The government is warning the storm could devastate the northern island of Luzon; we'll keep you up-to-date.

In Chile, we'll continue to follow the adjustments that 33 miners are making following their rescue from a mine where they were trapped for more than two months. We'll also be watching the search for survivors after mining incidents in Ecuador, where two were confirmed dead and two were missing after a Friday collapse, and China, where 26 miners were killed and 11 were missing after a gas leak and blast Saturday.

As early as this week, controversial whistle-blower website WikiLeaks could publish about 400,000 leaked military documents relating to the Iraq War. WikiLeaks published more than 70,000 secret military documents from the war in Afghanistan in July, and it's holding about 15,000 more Afghanistan documents that it is reviewing because they contain names or other sensitive information.

END_OF_DOCUMENT_TOKEN_TO_BE_REPLACED

Yemen was carrying out airstrikes and a ground campaign Sunday
against al Qaeda in the Arabian Peninsula in the southern part of the nation,
according to a government official.

"Yemen's security forces have been in engaged in a ground and air
campaign for two days in Abyan province against al Qaeda," said the official,
who is not authorized to speak to the press about the campaign. The official
said the battle is fierce and bloody and is part of a larger low-intensity
conflict with AQAP.

The airstrikes began on Saturday and were continuing on Sunday, the
official said. "This is no doubt in retaliation to an attempt by al Qaeda in
the Arabian Peninsula to kill the governor and junior regional security
officials this past week."

At Fort Hood: sounds of war, memories of a massacre

The distant rumble of big guns on Fort Hood's artillery range rattles the ceiling tiles in the small military courtroom.

But the sounds of war training don't interrupt the intensity inside the military hearing as dozens of witnesses here recall that day last November when 13 people were shot to death and 32 wounded on the base in central Texas.

Training with Paladin howitzers is part of everyday life at Fort Hood, the country's largest Army base. Most of the shooting victims were preparing to ship out to the battlefields of Iraq and Afghanistan.

But nothing prepared them for what happened to them at home - dodging bullets as a gunman cut down their buddies.

Australia got its first Catholic saint Sunday, a feisty 19th-century nun who was briefly excommunicated when her colleagues exposed an abusive priest.

Mary MacKillop co-founded the Sisters of St. Joseph of the Sacred Heart in 1867, and gained a reputation as the first Australian nun to leave the cities and minister to the rural poor.

Nuns in her order got evidence that a priest was engaged in "scandalous behavior," according to the Rev. Paul Gardiner, who has spent decades researching MacKillop's life.

END_OF_DOCUMENT_TOKEN_TO_BE_REPLACED

Israel is back in contact with a mediator who is trying to broker a deal for the release of captured soldier Gilad Shalit, Prime Minister Benjamin Netanyahu said Sunday.

"There was a renewal of contact with the German mediator," Netanyahu said in a radio interview Sunday.

END_OF_DOCUMENT_TOKEN_TO_BE_REPLACED 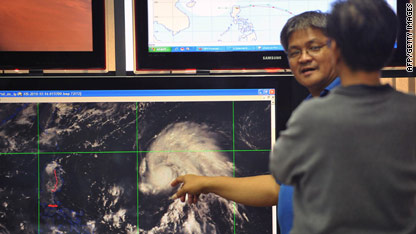 Emergency crews were on standby Sunday as the Philippines braced for a typhoon that could trigger flooding and landslides.

Typhoon Megi, also known as Typhoon Juan, is expected to make landfall midday Monday at or near super-typhoon strength, with winds possibly in excess of 200 kph (124 mph), according to Mario Montejo, secretary of the Philippines' science and technology.

On Sunday, Megi carried sustained winds of about 269 kph as it headed toward the Philippines, CNN meteorologist Ivan Cabrera said.

"This is a monster storm," Cabrera said. "It continues to show signs of intensification."

END_OF_DOCUMENT_TOKEN_TO_BE_REPLACED

[Update: 9:10 a.m.] A Gaza humanitarian convoy that includes passengers who survived a previous fatal flotilla incident has been delayed and is expected to set sail Monday in an attempt to deliver aid for Palestinians, organizers said.

Originally slated to depart on Sunday, last-minute complications over entry requirements by Egyptian authorities, caused a delay, organizers said. They hope to quickly resolve the issues and have the convoy on its way by Monday morning, the group said.

The Viva Palestina convoy, hailed by organizers as the largest convoy to break the Gaza embargo, has already traveled 4,828 kilometers (3,000 miles) by road from England. It is now waiting to depart from the Syrian port of Latakia to Al-Arish, Egypt.

It has been joined by convoys from Morocco, Algeria, Jordan and Persian Gulf nations, organizers said Saturday. Two of the ships are slated to pass through the point at which Israeli troops boarded the Mavi Marmara in May.

END_OF_DOCUMENT_TOKEN_TO_BE_REPLACED

An off-duty Baltimore, Maryland, police officer died late Saturday night after being attacked during an argument over a parking space.