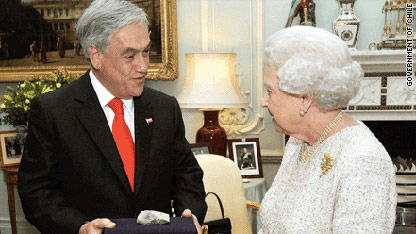 He gave the monarch a rock. But it was not just any rock. The stone that President Sebastian Piñera brought all the way from Chile to Buckingham Palace was from the bottom of the San Jose mine, once the underground prison of 33 miners and now a symbol of Chilean national pride.

Ever since the miners were rescued last week, Chile's newspapers have heralded "the Chilean way" in which the operation was carried out, opining that it will help the country move beyond the dark shadow of its military dictatorship past.

As part of his European tour, Piñera explained in detail to the queen how the rescue was carried out, according to a news release from his office.

It was unclear what the queen planned to do with the rock gift.