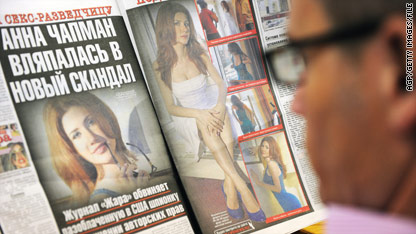 Russia’s Anna Chapman may be the highest-profile spy since Valerie Plame – except, of course, Plame didn’t seek out the spotlight.

Chapman, who was ousted from the United States this summer in a spy swap with her homeland, will appear in her underwear in Russia’s version of Maxim, a popular men’s magazine.

According to Russia’s state-run RIA Novosti, Chapman will appear on the magazine’s cover armed with a revolver and wearing nylon and lace. A photo on the Russian Maxim website shows her sitting on a red couch with two shooting targets in the background.

A trailer for the issue comes off like an ad for a cheesy James Bond action flick, except with more exposed breast and buttock – if you can imagine.

“Anna has done more to excite patriotism in Russians than our football team and the Bulava missile put together,” RIA Novosti quoted the magazine as saying.

Some things may be lost in translation here. The Bulava missile has suffered failure in more than half of its 13 tests, and the Russian soccer squad never even took the pitch in the World Cup after being dispatched by Slovenia in qualifying.

Details, schmeetails, right? All they really needed to say was, “Anna Chapman in lingerie.”

The magazine boasts it will be her first interview since she and nine fellow “sleeper agents” were rounded up by U.S.  authorities in June. They later pleaded guilty to failing to register as foreign agents and were ferried out of the country in a prisoner exchange reminiscent of the Cold War.

Chapman has been treated as a national hero since her homecoming. In a ceremony at the Kremlin on Monday, Chapman and her compatriots received top honors from President Dmitry Medvedev.

Russian media report she is now a consultant for an investment bank and was spotted about two weeks ago at the Baikonur Cosmodrome space station in Kazakhstan working on exploration projects.