Contractor: We could build homes if banks 'loosen up' 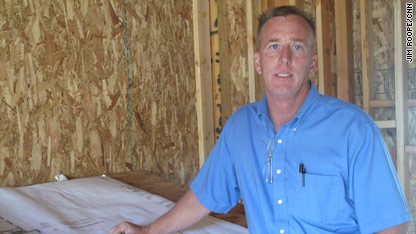 Contractor Paul Kinney, owner of Race Point Inc., on the site of a $3.5 million new home, says the Building Permit/Housing Starts report is misleading. Banks are not funding the permits. Most projects, like the one he's building now, are funded by foreign money.

The U.S Census Bureau and Department of Housing and Urban Development released its monthly report on housing permits and new construction and it shows the upward trend in this economic indicator continues.

CNN's Jim Roope reports however that the contractors who turn building permits into buildings say these numbers are not necessarily reality because banks are still hesitant to fund permitted projects. Contractors say new homes may be getting the green light by cities, but not the greenbacks by the banks to start construction or in some cases complete construction.

Paul Kinney, owner of Race Point Incorporated, a top 500 builder of new homes, says he can get 30 permits by the middle of next week, but the banks aren’t lending money so the report is misleading.

“Remember a couple of weeks ago when they came out and said guess what the recession was over? That rumble you heard was the construction industry laughing their ‘friggin’ brains out,” said Kinney.

You can also listen to the CNN Radio Reports' podcast on iTunes or subscribe to the podcast.

Or you can listen to the CNN Radio Reports podcast on