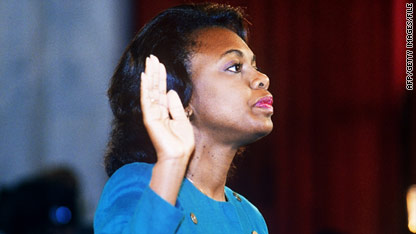 Anita Hill testified in 1991 about about claims of sexual advances from then-Supreme Court nominee Clarence Thomas.

Who is Anita Hill and what does Justice Clarence Thomas' wife want her to apologize for?

Before Thomas became a federal judge, he worked in the Department of Education and later was chairman of the U.S. Equal Employment Opportunity Commission from 1982 to 1990.

After President George H.W. Bush nominated Thomas to replace Justice Thurgood Marshall on the Supreme Court, Thomas underwent nomination hearings in the U.S. Senate and a vote was scheduled.

Two days before the scheduled vote, Hill, a law professor at the University of Oklahoma, told the Senate Judiciary Committee that Thomas had sexually harassed her when he was her boss at the Education Department and the EEOC.

Time magazine described what followed as an "ugly circus" in which both Thomas and Hill were "eviscerated."

Hill testified that Thomas repeatedly asked her out on dates and spoke to her crudely about his sexual prowess and things he had seen in pornographic movies. She said she rebuffed his advances and always tried to change the subject when he started talking about sex.

Read a transcript of Hill's testimony and Thomas' rebuttal here.

She said the harassment died down for a while, so she felt safe following him to his new position at the EEOC. However, the push for dates and the sexual talk resumed and even escalated at the new job, she told the committee, whose chairman was Sen. Joe Biden, D-Delaware.

"He began to show displeasure in his tone of voice and his demeanor in his continued pressure for an explanation [of why I wouldn't go out with him]," Hill testified. "He commented on what I was wearing in terms of whether it made me more or less sexually attractive. The incidents occurred in his inner office at the EEOC.

"One of the oddest episodes I remember was an occasion in which Thomas was drinking a Coke in his office, he got up from the table at which we were working, went over to his desk to get the Coke, looked at the can and asked, 'Who has put pubic hair on my Coke?'"

Hill said she was hospitalized for five days with severe stomach pain that she attributed to job-related stress, and she subsequently sought employment elsewhere.

She said she finally consented to go to dinner with Thomas one time on her last day of employment with the government. During that dinner, she said, Thomas told her that if she ever told anyone about his behavior it would ruin his career.

"This was not an apology, nor was it an explanation," she said.

The media went crazy over Hill's testimony, which was carried live on television and radio. Some senators and others who supported Thomas questioned her truthfulness and even her mental state.

Thomas demanded that he be allowed to rebut Hill's allegations and clear his name before the Senate decided on his confirmation, so the vote was postponed for a week.

"This is a person I have helped at every turn in the road, since we met," Thomas told the Judiciary Committee. "She seemed to appreciate the continued cordial relationship we had since day one. She sought my advice and counsel, as did virtually all of the members of my personal staff.

"During my tenure in the executive branch as a manager, as a policymaker, and as a person, I have adamantly condemned sex harassment. There is no member of this committee or this Senate who feels stronger about sex harassment than I do. As a manager, I made every effort to take swift and decisive action when sex harassment raised or reared its ugly head.

"The fact that I feel so very strongly about sex harassment and spoke loudly about it at EEOC has made these allegations doubly hard on me. I cannot imagine anything that I said or did to Anita Hill that could have been mistaken for sexual harassment."

The Senate confirmed Thomas' nomination on October 15, 1991, on a 52-48 vote, the closest Supreme Court confirmation vote in history.

Thomas would later refer to the hearings as a "high-tech lynching for an uppity black."

Thomas went on to become one of the most conservative justices on the court, and one of the least heard. He seldom asks questions during oral arguments and rarely grants interviews, but a 2004 Washington Post profile suggests he carries considerable clout.

Hill now teaches law at Brandeis University and spends her free time painting and drawing, according to a 2005 CNN.com article.

The controversy over Hill's allegations brought workplace sexual harassment out into the open. According to a George Mason University analysis of EEOC documents, sexual harassment cases more than doubled in the five years following Thomas' nomination. Over the same period, awards to victims under federal laws jumped from $7.7 million to $27.8 million, records showed.

The scandal became a textbook case for teaching about sexual harassment and how employees and employers should deal with it.

The case also may have spurred more women to get into politics, as many women were appalled by the way Hill was questioned by the all-male Senate panel.

"Anita Hill focused attention on the fact that there were no women in that Senate panel making decisions about people's lives," said Harriett Woods, then president of the National Women's Political Caucus, according to the Museum of Broadcast Communications in Chicago, Illinois.

Check out this archival material from Time:

Sex, Lies and Politics: He Said, She Said

Clarence Thomas: A Question of Character
Anita Hill's Legacy in the Workplace