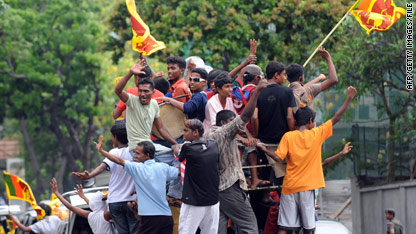 Sri Lankan President Mahinda Rajapaksa said at the time that amnesty and rehabilitation would be central elements to a reconciliation campaign. The government also is offering counseling to child soldiers from the conflict, and hundreds of children have returned to their families and to school.

Last week, the government released 498 militants, half of them women, in the town of Vavuniya after they completed vocational and English training.

“The private sector firms have shown interest to recruit them, mostly in the apparel export sector,” the embassy news release said.

Before laying down their arms in May 2009, the Tamil Tigers, also known as the Liberation Tigers of Tamil Eelam, were a fierce militant group known for inventing the suicide bomb belt and employing women in suicide attacks, the Council on Foreign Relations reported.

They were also named in the assassinations of more than a dozen high-level government officials, including President Ranasinghe Premadasa in 1993 and Foreign Minister Lakshman Kadirgamar in 2005.

The CFR backgrounder notes the Sri Lankan government is alleged to have committed its share of atrocities as well, including abductions, extortion, conscription and the use of child soldiers.

This week, Amnesty International called for an investigation into recent reports of war crimes that occurred during the conflict, including deprivation of food, water and medical care.

“Given the magnitude of the crimes that have been committed by both sides of the conflict, only a full independent international investigation into the alleged war crimes in Sri Lanka will satisfy the global community,” Kate Allen, director of Amnesty UK, said in a news release.

Amnesty also called the government’s reconciliation effort “suspect at best” and expressed concern for tens of thousands of displaced Sri Lankans living in makeshift camps and for the 7,000 Tamil Tigers held incommunicado in “rehabilitation camps.”

Tamils are an ethnic group in southern India and Sri Lanka. They compose about 20 percent of Sri Lankans and are separated by their language (Tamil) and religion (Hinduism). The majority of Sri Lankans are Sinhalese, speak Sinhala and practice Buddhism.

The Tigers have sought an independent homeland for Tamils since the 1980s and feel persecuted by the Sinhalese, according to the Council on Foreign Relations.