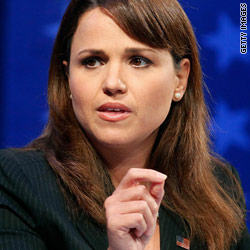 The Delaware Senate Candidate has proclaimed herself an expert on the U.S. Constitution. She attributes this knowledge to her time in 2002 as a Lincoln Fellow at the Claremont Institute.

The weeklong fellowship includes various topics on constitutional law. Talking Points Memo, which received a Polk award in 2007 for reporting, obtained a copy of the 2002 syllabus earlier this week.

Nine fellows joined O’Donnell that week. The group includes a woman who went on to become the lead attorney for the Republicans on the House Oversight Committee and a man who was legislative director to former Indiana Congressman John Hostettler.

Most notable of the class is Scott Bloch, who went on to run the White House Office of Special Counsel overseeing whistleblower protection. Earlier this year, he pleaded guilty to contempt of Congress charges regarding the scrubbing data from White House computers.

She is one of the most experienced and influential Democrats in Washington, yet in mainstream circles few probably know that Ricki Seidman found Anita Hill. In 1991, Seidman was an investigating Clarence Thomas' Supreme Court nomination through her work on the Senate Judiciary Committee. Noting his travel to Oklahoma, she eventually heard about the young woman who’d confided to a friend about her experiences with Thomas. While Hill initially wanted to be anonymous, she was eventually identified.

Seidman went on to run Bill Clinton’s 1992 campaign. She was also the executive director at Rock the Vote. Most recently she advised the Obama administration regarding the nomination of Sonia Sotomayor to the U.S. Supreme Court.

His appearance at Monday night’s New York gubernatorial debate was a scene-stealer. By Tuesday, his mantra about the city’s downtrodden was hot internet fodder. This morning, The New York Times brought further attention to the candidate of the rent-is-too-damn-high party by discovering, in an interview, that McMillan lives rent free.