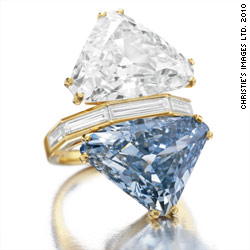 A rare, two-stone ring set a new record price per carat for a blue diamond at auction when it sold for $15.7 million to an Asian collector, Christie's auction house said.

The Bvlgari Blue Diamond, a ring designed in the 1970s, was expected to fetch around $12 million at an auction Wednesday in New York, owing to the rarity and size.

After a trading bets on the phone in increments of $500,000 with a European collector, an Asian collector secured the piece for $15,762,500 with premium.

Fancy Vivid blue diamonds are among the rarest and most sought-after of colored diamonds, as only one in about 10 million possess a color pure enough to qualify as “Fancy Vivid,” according to Christie's.

The piece was the final jewel offered up in the 447-item auction, which brought in $52.5 million, Christie's said.

The Bvlgari Blue came from a private European collector who bought the ring at Bvlgari's flagship boutique in Rome, Italy, in 1972 for his wife to celebrate the birth of their first child, Christie's said.