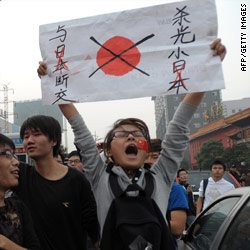 A protester in Wuhan, China, on Sunday holds up a sign which reads, "Kill all Japanese, break all relations with Japan."

Japan will add six submarines to its current fleet of 16 during the next four years as it sees increased naval activity from Asian neighbor China, according to news reports from Tokyo on Thursday.

The new vessels will give Japanâ€™s Maritime Self-Defense Force its largest submarine fleet since it was established in 1976, according to a Kyodo News Service report in Japanese newspapers. Kyodo said the submarine building program was revealed by MSDF and Defense Ministry officials on condition of anonymity. It will be formalized in December for implementation during 2011 to 2015, the report said.

China maintains a fleet of about 60 submarines, according to the Kyodo report.

Tensions between Japan and China reached a recent peak in September when a Chinese fishing boat collided with a Japanese coast guard vessel near a disputed island chain in the East China Sea, known as the Senkaku Islands in Japan and the Diaoyu Islands in China. Japan detained the captain of the Chinese boat for weeks while Tokyo and Beijing engaged in a diplomatic tit for tat.

The tensions appeared to have cooled earlier this month, but Yomiuri Shimbun reported Thursday that China had recently sent three fishery patrol boats to the disputed islands.

"Going to waters off the Diaoyu Islands and protecting [Chinese] fishing activities there is part of protecting national sovereignty and the legal interests of fishermen," an official of China's Agriculture Ministry, which is in charge of supervising fishery patrol boats, said, according to the Yomiuri report.