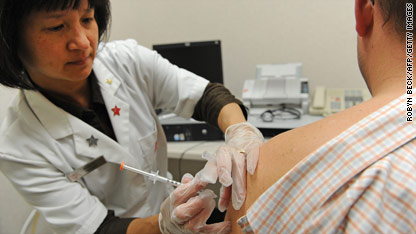 A pharmacist administers a vaccine for whooping cough in Pasadena, California.

Whooping cough deaths - Whooping cough, also known as pertussis, has claimed the 10th victim in California in what health officials are calling the worst outbreak in 60 years. Since the beginning of the year, 5,978 confirmed, probable and suspected cases of the disease have been reported in California.

All the deaths occurred in infants under 3 months, says Michael Sicilia, a spokesman for the California Department of Public Health. Nine were younger than 8 weeks old, which means they were too young to have been vaccinated against this highly contagious bacterial disease. CNN will explore how to prevent this type of outbreak and┬Āwhat whooping cough is as well as bring personal stories of those dealing with it.

Democrats preparing for worst? - It has been said over and over again: The 2010 midterms is the anti-incumbent, anti-Washington and by virtue of their position in power, the anti-Democratic election.

A sputtering economy, 9.6 percent national unemployment rate, housing crisis and little hope for a quick turnaround on the jobs front has forced Democrats on the defense heading into November.

Democrats are under siege all across the country and are in deep danger of losing control of the House of Representatives and perhaps even the Senate┬Āif a massive wave develops on November 2, reports Mark Preston, CNN's senior political editor.

"Almighty Debt": - Carl Fields flips through hundreds of job applications he's filled out during the last 20 months of unemployment.

Fields, 59, is an African-American in Plainsboro, New Jersey, with a bachelor's degree who has been unemployed since February 2009. He was let go from his job as a vice president at a large insurance brokerage firm. He had worked there for more than 25 years.

He is also a devout Christian with an enormous amount of faith that he soon will be employed again. Unfortunately, there are a slew of statistics that suggest his optimism may be unwarranted.

CNN's Soledad O'Brien looks at how some are fighting debt from the pulpit in "Almighty Debt: A Black in America Special," premiering at 9 p.m. ET Thursday.

Winter takes its last breath across most of the US this week, with widespread below-average temperatures and late-sŌĆtwitter.com/i/web/status/1ŌĆ”ed
CNNweather

8:39 am ET April 14, 2021 RETWEET
Tiny bits of plastic from your packaging and soda bottles could be traveling in the atmosphere across entire continŌĆtwitter.com/i/web/status/1ŌĆ”js
CNNweather

10:06 am ET April 13, 2021 RETWEET
Rain on other planets is something scientists are still striving to understand, but new research has suggested rainŌĆtwitter.com/i/web/status/1ŌĆ”pl
CNNweather

8:04 am ET April 13, 2021 RETWEET
Some Americans across the country are fleeing their homes from wildfires and other effects of climate change, askinŌĆtwitter.com/i/web/status/1ŌĆ”Fo
CNNweather