Giants push Phillies to the brink in NLCS 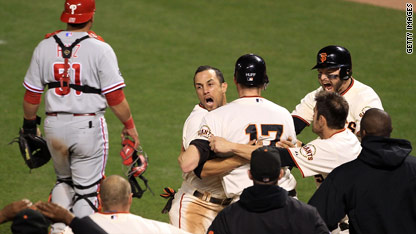 The Giants celebrate after Aubrey Huff scored to beat the Phillies.

The San Francisco Giants are on the verge of pulling off a major upset in the National League Championship Series.

If they win tonight, or any of the last three games they go to the World Series for the first time since 2002. Juan UribeŌĆÖs sacrifice fly in the bottom of the ninth inning off the Phillies Roy Oswalt scored Aubrey Huff to give the Giants a 6-5 victory last night.

Baseball followers are questioning why Phillies manager Charlie Manuel decided to use Oswalt, a starting pitcher, in a relief role. The series resumes tonight in San Francisco with a battle of ace pitchers, Roy Halladay for the Phillies and Tim Lincecum for the Giants.

If the Phillies win, the series moves back to Philadelphia, for game 6 on Saturday and a potential game 7 on Sunday. The winner of this series will play the Texas Rangers or New York Yankees in the World Series, starting next Wednesday.

France strike - Some 200 demonstrators blocked France's Marseille-Provence airport for more than three hours Thursday as strikes and protests continued across the country.┬Ā The action comes┬Āahead of┬Āa final vote on the country's Pension Reform Bill.┬Ā Pop star Lady Gaga postponed two Paris shows this weekend because of "the logistical difficulties due to the strikes," her website said.

END_OF_DOCUMENT_TOKEN_TO_BE_REPLACED

Tiny bits of plastic from your packaging and soda bottles could be traveling in the atmosphere across entire continŌĆtwitter.com/i/web/status/1ŌĆ”fZ
cnni

6:44 am ET April 13, 2021 RETWEET
With an average of 3.1 million doses of Covid-19 vaccine administered each day, the US is on pace to hit another vaŌĆtwitter.com/i/web/status/1ŌĆ”BO
cnni