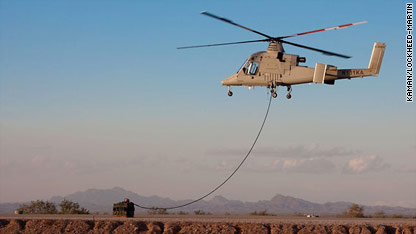 The U.S. military is hoping to use remote-controlled helicopters like these, shown in January 2010, for supply delivery.

Faced with increasing casualties from roadside bombs in Afghanistan, the U.S. military will experiment with remote-controlled, unmanned helicopters to deliver supplies to remote outposts, the U.S. Navy said.

The U.S. Navy is seeking a contractor to operate the program, planned for the last quarter of 2011, Eric Pratson, leader of the U.S. Navy team behind the project, told CNN.

ŌĆ£This is a rapid deployment effort being led by the Navy in response to an urgent needs requirement for a Cargo UAS (unmanned aircraft systems) capability in support of Marine Corps forces engaged in Operation Enduring Freedom,ŌĆØ Pratson told Stars and Stripes, which first reported the plan.

Lockheed-Martin and Kaman Aerospace say their K-MAX unmanned helicopter system can do the job. They tested it at the ArmyŌĆÖs Dugway Proving Ground earlier this year and it met or exceeded requirements, according to a Lockheed-Martin statement.

The company says the K-MAX can operate day or night, deliver up to 3,450 pounds of supplies to up to four locations per trip and hover at 12,000 feet. 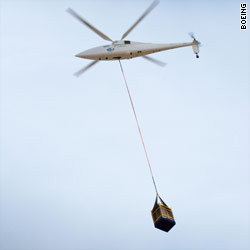 Boeing is also vying for the contract with its A160T Hummingbird unmanned copter, the company said Wednesday. It said the A160T passed a Marine Corps test in March, successfully delivering 2,500 pounds of supplies during a simulated mission.

ŌĆ£This capability will save lives by getting troops and trucks off of roads where they are highly vulnerable to IED attacks,ŌĆØ Vic Sweberg, director, Boeing Unmanned Airborne Systems, said in a statement.

The program is still open to other bidders, Pratson told CNN in an e-mail.