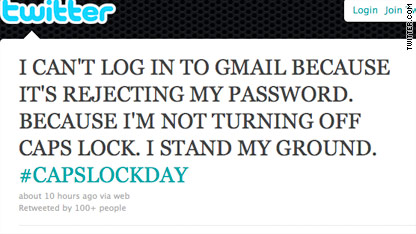 One of thousands of Twitter status messages about CAPS LOCK DAY.

THERE'S NOTHING MOST TECH-SAVVY PEOPLE HATE MORE THAN SEEING THIS - THE ESSENTIAL SHOUTING OVER THE COMPUTER - THROUGH THE ENTIRE USE OF THE CAPS LOCK.

BUT APPARENTLY TODAY WE ARE TO CELEBRATE IT IN HONOR OF INTERNATIONAL CAPS LOCK DAY, WHICH┬Ā HAS ITS OWN WEBSITE, AND NOW ITS OWN TWITTER ACCOUNT (THOUGH THERE ARE ONLY A FEW POSTINGS.)

I HAVEN'T A CLUE AS TO WHY WE ARE WE CELEBRATING SOMETHING THAT DRIVES MOST PEOPLE CRAZY - AND TO A POINT WHERE IT'S A TRENDING TOPIC ON GOOGLE AND TWITTER. A QUICK SEARCH OF THE WEB SHOWS ME IT WAS JUST AN IDEA THAT HAPPENED IN 2000 AND HASN'T STOPPED SINCE.

I ALREADY CAN'T STAND LOOKING AT THIS POST IN ALL CAPS, IN THE SAME WAY I CAN'T STAND IT WHEN SOMEONE WHO'S NEVER TYPED AN E-MAIL BEFORE (THAT'S YOU, MANY MOMS AROUND THE WORLD) AND THEY TYPE IT IN MASSIVE 20-POINT, BRIGHT PINK, ALL CAPS FONTS. WE GET IT, YOU LOVE US. OR HATE US. OR WHATEVER YOU'RE TRYING TO CONVEY THAT YOU MUST SHOUT IT IN ELECTRONIC COMMUNICATION.┬Ā NOT TO MENTION, AS SOME PEOPLE NOTED, OBSERVING THE HOLIDAY BRINGS YOU PROBLEMS WITH YOUR PASSWORD.

so. with that. we at this just in, will scoff at the all caps, and go another route, marking this day of punctual sacrifice in a paradoxical ee cummings-esque style. (because that much caps lock, would even make me want to scream at me for typing this way.) so we say, forget the caps - completely.

and we have the backing and firepower of the federal highway administration behind us. seriously. they just recently directed every city, town and place in the nation to make every new street sign must have upper- and lower-case letters in hopes of increasing legibility and reducing accidents.

see ya later MAIN STREET, hello Main Street. (forgive our use of the caps there, it was just to show the point.)

not everyone is happy - specifically - the city that never sleeps. it's known for its iconic signs in all caps. on the streets, subways and everywhere else.┬Ā now the city says it would cost them more than $27 million to complete the task. and will anyone want to buy a street sign that says Madison Ave? certainly it's not as attractive as the iconic MADISON AVE. (apologies again.) and new yorkers are not happy either, the daily news reported.

Okay, enough with the ridiculousness, our copy editors are probably up in arms by now.

Let's just take this time to be thankful that while the Internet will be lit up in all caps today, it could be worse, we could be celebrating Comic Sans day.

And we know how you feel about that.

The former President of the Philippines Benigno Aquino III died Thursday at the age of 61 after being hospitalizedŌĆtwitter.com/i/web/status/1ŌĆ”fA
cnni

3:31 am ET June 24, 2021 RETWEET
National Geographic, one of the world's pre-eminent and most visible mapmaking groups, has officially decreed the eŌĆtwitter.com/i/web/status/1ŌĆ”Ok
cnni

3:01 am ET June 24, 2021 RETWEET
An ancient mummy, believed to belong to a priest, got a CT scan at a hospital in Milan, Italy. The procedure is parŌĆtwitter.com/i/web/status/1ŌĆ”Ep
cnni