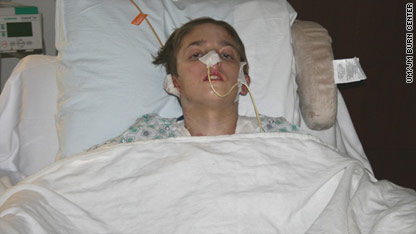 Michael Brewer in his hospital bed at Jackson Memorial Hospital on November 23.

For the first time in more than a year, Michael Brewer saw the three former friends who are accused of pouring alcohol over him and setting him on fire in a dispute over a video game and $40. He suffered burns on more than 65 percent of his body and was hospitalized for over two months after the attack in Deerfield Beach.

One by one, the three teens walked into the Broward County courtroom in orange jumpsuits and shackles Friday. No words were exchanged, and it’s unclear whether the defendants saw Brewer, who sat in the back with his family.

There had been an expectation that a plea deal was imminent, but it was not to be.

Police said the attack started over a video game and a bicycle. One of the boys demanded $40 he said Brewer owed him, and when he didn’t pay, he stole Brewer’s father’s bicycle, police said.

Brewer identified the boy, Matthew Bent, to police, and they arrested him. The next day, after Bent was released, the group found Brewer and surrounded him, officials say.

Witnesses told police that 15-year-old Denver Jarvis poured alcohol over Brewer, and 16-year-old Jesus Mendez used a lighter to start the fire. Bent is said to have encouraged the attack.

Witnesses told police that Brewer ran about 100 yards to an apartment complex pool, where he dived in to save himself.

Brewer celebrated his 16th birthday last week. He told CNN’s John Zarrella that he’d like to deal with the three boys himself.

“But it's over and done with. They're getting what they deserved,” he said. “I'm taking therapy to get rid of the anger and stuff."

The three teens were charged as adults with attempted murder. They faced six to 30 years if convicted.

On Friday, Broward County Assistant State Attorney Maria Schneider announced the plea offers that attorneys have been discussing for some time.

However, Mendez’s attorney, Melissa Zelniker-Presser, told the court the prosecution’s offer had been 10 years and balked at the offer Schneider announced in court.

Zelniker-Presser and the other defense attorneys then asked that the cases to be reset.

Defense attorneys indicated that they will move forward with scheduling witness interviews in preparation for a potential trial, which probably will not go any earlier than next year.

“We have a significant amount of work left to be done,” Zelniker-Presser told the judge.

Brewer earlier told CNN that he was prepared to see the former friends again in court and would have testified against them.

“I think they're just jerks, and they got what they deserved,” he said.

- In Session's Aletse Mellado contributed to this report.