Could this be President Obama's first iPad signature? 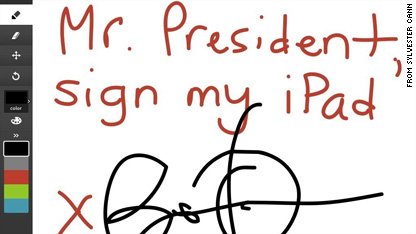 Sylvester Cann didn't think it would work. But he figured it was worth a try.

And, lo and behold, where others seeking President Obama's signature with a pen and paper had failed, Cann ﻿obtained the commander in chief's autograph on his iPad, in what's believed to be the first instance of the president signing an iPad for an autograph-seeker.

The White House did not immediately respond to a request for comment.

The legislative aide was at a rally Thursday at the University of Washington ﻿in Seattle ﻿﻿when the idea came to him. He was on the rope line, right near where the president would pass by, and he didn't have a pen and paper.

But he did have his iPad.

"I thought, I won't be able to give him a pen, so I might as well pull up a drawing app on the iPad and see if I can make it happen," said Cann, a University of Washington alumnus.

Using the Adobe Ideas app, he wrote his request on the iPad screen - "Mr. President, sign my iPad" - and held it up as Sen. Patty Murray made her way down the line, followed by President Obama.

At first, a Secret Service agent nodded disapprovingly at the iPad, Cann said. But, when Cann shook Obama's hand and gestured toward the iPad, the president appeared to be intrigued.

"I said, 'you can sign it with your finger,' and I showed him how to do it in the corner," he said.

A YouTube video shows the president signing the screen and smiling at Cann before walking off.

People around him with pens and paper were not allowed to obtain a signature, Cann said, so they took pictures of his iPad.

At first, Cann thought little of the digital autograph, until friends pointed out that it could be the first-ever "Obama iPad signature."

Since then, Cann's phone has been ringing, and he has set up a website and posted the YouTube video documenting the encounter.

"I think it’s fun," he said. "I'm a big fan of technology, so when people are able to do things like this, it's using technology to its fullest advantage. It's cool."