Giant panda Lun Lun is pregnant, and officials at the Atlanta, Georgia, zoo say they are thrilled.

Animal and veterinary teams estimate that a birth could occur in 10 days to two weeks.

It would be the first panda birth in the U.S. this year. Memphis, San Diego and Washington, D.C., zoos also have pandas, but none has produced a baby panda this year.

Thirteen-year-old Lun Lun was artificially inseminated, and the father is Zoo Atlanta's Yang Yang. Lun Lun and 13-year-old Yang Yang have already given birth to two cubs - Mei Lan, a 4-year-old female who now lives in China, and a male, Xi Lan, 2, who resides at Zoo Atlanta.

The giant panda is an endangered species, so another birth is good news for the zoo and, of course, the species.

"We're absolutely excited about the news," said Rebecca Snyder, the curator of mammals at Zoo Atlanta. "Many times, zoo handlers are not aware that a panda is pregnant until after the birth, so to know ahead of time is a special treat."' 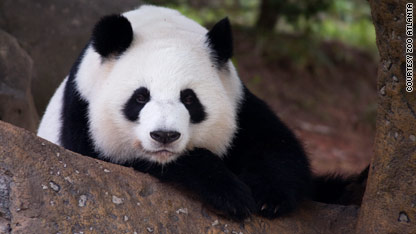 Lun Lun is expected to give birth in the next two weeks.

Lun Lun was artificially inseminated on June 13 after the pair failed to mate naturally.

Zoo Atlanta said giant panda gestation periods have been documented to be as short as 83 days or as long as 197 days, and the average pregnancy is 135 days.

Ultrasound procedures will track the progress of the developing fetus, zoo officials said.

Fans of the panda can watch Lun Lun on the zoo's PandaCam, which runs Monday through Friday from 10 a.m. to 5 p.m. ET.

Lun Lun and Yang Yang were born in China. They have lived with each other since they were 1 and came as a pair to Zoo Atlanta in 1999.

Lun Lun's birth name, given to her by keepers, was Hua Hua, and Yang Yang's birth name was Jiu Jiu.

Single-cell organisms billions of years old are being used to clean grime from famous works of art and strengthen m‚Ätwitter.com/i/web/status/1‚Ä¶hZ
cnni

8:30 am ET October 26, 2021 RETWEET
Here are six key takeaways from the tens of thousands of pages of internal documents revealed in the Facebook Paper‚Ätwitter.com/i/web/status/1‚Ä¶eI
cnni

8:07 am ET October 26, 2021 RETWEET
Ditching your running watch, especially if it's a smartwatch or fitness tracker, could actually improve your workou‚Ätwitter.com/i/web/status/1‚Ä¶GM
cnni