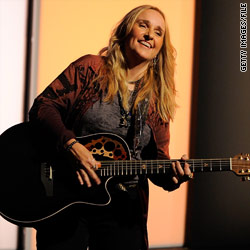 The singer is vocalizing her support for California's Proposition 19, a ballot initiative that would legalize marijuana. She says she used medicinal marijuana while recovering from breast cancer. Etheridge told The Los Angeles Times that when she underwent chemotherapy, she was given a choice of 10 drugs with side effects or a "natural solution."

Etheridge, who described herself as a medicinal marijuana user, said, "I don't want to look like a criminal to my children anymore. I want them to know this is a choice that you make as a responsible adult."

Etheridge attended a news conference in Hollywood alongside actors Danny Glover, Hal Sparks and others to announce their support for the initiative.

The former assistant U.S. attorney and Senate Judiciary Committee counsel has something to say about Clarence Thomas, and she has decided to break her silence after almost twenty years.

In an interview with the The Washington Post, McEwen, 65, says that when Anita Hill accused Clarence Thomas of sexual harassment in 1991 and Thomas denied the allegations, citing a steady relationship with another woman – Lillian McEwen was that woman.

She tells the Post that she was on good terms with Thomas during that time, and attended a White House state dinner with him in March 1985. McEwen was never asked to testify, and although she had been approached by several reporters over the years, she refused to talk, saying that "nothing good" would come of it. That changed when she heard that Thomas’ wife Virginia left a voice mail on Hill’s office phone seeking an apology. McEwen tells The Washington Post, “I have nothing to be afraid of."

The retired prosecutor, law professor, and administrative judge, who has been married twice and has a 32-year-old daughter, has written a memoir that she hopes will be published.