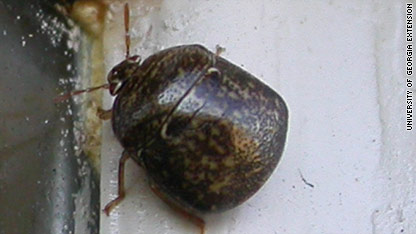 Atlanta thrives on tourism, but it's holding its nose at the arrival of a new group of visitors.

Northeast Georgia has been invaded by stink bugs from Asia that are feeding on the region's pervasive kudzu - itself an invasive Asian species.

"It's a new invasive that appeared, to our recognition, last October," said Wayne Gardner, a professor of entomology at the University of Georgia's Griffin campus.

The insects - called kudzu bugs - were identified in eight Georgia counties in December. So far this year they've been spotted in 80 counties.

"In our office alone we've had over 30 calls about the bug," said Lynwood Blackmon, UGA agricultural extension agent for DeKalb County, which includes part of the east side of Atlanta and some of its eastern suburbs.

Last year DeKalb had two or three reports, he said.

"We're on the radar in terms of having the bug in this location," Blackmon said.

They've also been seen in one county in South Carolina and a few places in North Carolina, Gardner said.

Tennessee and Alabama probably will get the little stinkers soon, Gardner said, because the bugs have been observed in counties bordering those states.

UGA researchers are studying the DNA of specimens from China, Japan and Malaysia to try to determine where Georgia's invaders originated, he said. That information might help scientists figure out how they arrived in the U.S., he said.

The bugs, which look like boxy brown ladybugs, emit a foul-smelling secretion when threatened. Witnesses have reported being able to smell the stench from their cars while crews are cutting kudzu overgrowth along highways, Gardner said.

As the kudzu vines begin to lose their leaves for the fall, the bugs have been congregating on light-colored surfaces, especially the white parts of houses. Entomologists haven't figured out why since kudzu is green.

"They're looking for a place to hunker down for the winter and stay," Gardner said. "That could be in your attic or the debris around your home or whatever."

A basic insecticide for household pests will temporarily control the kudzu bugs around your home, but the best defense is good screening, Blackmon said. If they come inside, vacuum them up and toss the vacuum bag before it starts to stink, he advised.

In addition to kudzu, the bugs are feeding on soybean plants, though it's not yet clear whether they pose a significant threat to agriculture - "and that would include our famous peanut," Gardner said.