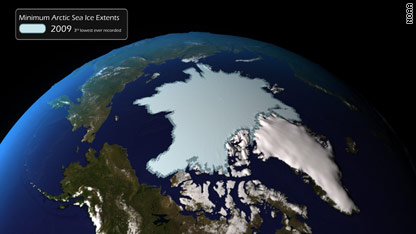 Changes such as a decrease in sea ice have consequences elsewhere, the report says.

The Arctic's warming trend is beginning to affect the climate farther south, the National Oceanic and Atmospheric Administration said this week in its annual Arctic Report Card.

"There is evidence that the effect of higher air temperatures in the lower Arctic atmosphere in fall is contributing to changes in the atmospheric circulation in both the Arctic and northern mid-latitudes," wrote the report's authors, a team of 69 international scientists.

Extreme cold and big snowfalls can be blamed on the Arctic changes, according to NOAA.

"Beyond affecting the humans and wildlife that call the area home, the Arctic's warmer temperatures and decreases in permafrost, snow cover, glaciers and sea ice also have wide-ranging consequences for the physical and biological systems in other parts of the world," NOAA Administrator Jane Lubchenco said.

Sea ice reaches its minimum in September every year. This year's September ice cover was the third-smallest recorded since microwave satellites started taking measurements in 1979, the authors wrote.

"The last four summers have experienced the four lowest minimums in the satellite record, and eight of the 10 lowest minimums have occurred during the last decade," the report card said.

The sea ice also appears to be much younger than two decades ago, as ice that survived from year to year has dwindled to a fraction of its former mass, the data showed.

"A combination of a warm and dry 2009-2010 winter and the very warm summer resulted in the highest melt rate since at least 1958 and an area and duration of ice sheet melting that was above any previous year on record since at least 1978," the authors wrote.

Furthermore, "a clear pattern of exceptional and record-setting warm air temperatures is evident at long-term meteorological stations around Greenland," they wrote.

Though summer rainfall brought some relief to the Southwest, the unrelenting drought there is about to get worse wiâ€twitter.com/i/web/status/1â€¦Np
CNNweather

11:44 am ET October 15, 2021 RETWEET
The Alisal Fire has exploded in size over the past four days and is now approaching the Santa Barbara ranch once owâ€twitter.com/i/web/status/1â€¦72
CNNweather

9:36 am ET October 15, 2021 RETWEET
As world leaders prepare to meet next month on the climate crisis, they'll be using a lot of technical lingo. Hereâ€twitter.com/i/web/status/1â€¦Uo
CNNweather