The cornerstone climate measure of Democrats' massive spending package will likely be dropped after pushback from Sātwitter.com/i/web/status/1ā¦9A

A man who was shot during protests last year in Kenosha, Wisconsin, is suing the city, the county and many of its oātwitter.com/i/web/status/1ā¦uN

Alex Murdaugh waived an extradition hearing in Florida and is expected to return to South Carolina to face chargesātwitter.com/i/web/status/1ā¦C5

A tour bus was stuck on a cliff, with the driver and a passenger suspected still trapped inside, according to the Coast Guard Administration of Taiwan. It was not immediately clear whether they were injured or dead. Another tour bus, with 19 people aboard, was missing.

Soldiers were deployed to rescue those trapped, including about 200 visitors from China, said Cai Min, a spokesman for Taiwan's National Disaster Prevention and Protection Commission. More than two dozen travelers had been rescued by late afternoon Friday, officials said.

A fast-moving cholera outbreak north of the Haitian capital has killed at least 138 people, a U.N. official said Friday.

Another 1,526 cases are also part of the outbreak, said Imogen Wall, the U.N. humanitarian spokeswoman in Haiti. All the cases have been reported in the Lower Artibonite region, north of Port-au-Prince, she said.

"This is a situation that's developed very quickly. It's only been 48 hours and we've already got 138 deaths confirmed," Wall told CNN.

She called the situation "a serious development, partially because cholera is a very dangerous disease, and it spreads very fast, but also because it's unusual to Haiti," she said. "There hasn't been an outbreak here in decades."

Marine: 'No time to really think' before saving man from train

What would you do if a stranger fell off a train platform onto the track right in the path of an oncoming train? Would you jump in and help?

Well, 57-year-old former Marine Dimas Pinzon did just that in Rosslyn, Virginia, yesterday. He spoke with CNN's John Roberts and Kiran Chetry of American Morning about the harrowing details: 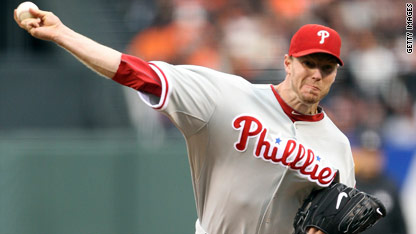 Roy Halladay pitched through a groin injury to lead the Phillies to victory Thursday night.

The Philadelphia Phillies staved off elimination in the National League Championship series with a 4-2 victory over the San Francisco Giants on Thursday night.

The defending National League champions now trail the best-of-seven series 3-2, with games 6 and 7 scheduled for Philadelphia on Saturday and Sunday.

The Phillies were helped by a Giants error in the third inning that led to two runs and were inspired by their pitching ace Roy Halladay, who pitched six strong innings despite injuring his groin in the second. Read SI.com columnist Joe Posnanski on Halladay's gutty performance.

END_OF_DOCUMENT_TOKEN_TO_BE_REPLACED

The FBI is investigating a package sent to Arizona Rep. Raul Grijalva's office in Tucson, according to a spokesman for the congressman.

END_OF_DOCUMENT_TOKEN_TO_BE_REPLACED

Is candy corn a trick or a treat when you put it in bratwurst? CNN's Jeanne Moos reports on the latest gross-soundiātwitter.com/i/web/status/1ā¦9F
cnni

11:31 pm ET October 15, 2021 RETWEET
An Apple employee who led organizing efforts against harassment and discrimination within the company said she hasātwitter.com/i/web/status/1ā¦2K
cnni