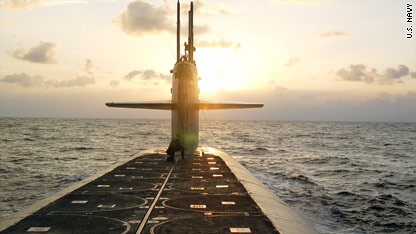 Women will serve on the USS Wyoming and three other U.S. Navy submarines.

Twenty-four are in training to be the first women to serve aboard U.S. submarines, the Navy's Submarine Group 10 said in a statement. The subs on which they will deploy are the USS Wyoming and USS Georgia, both homeported in Kings Bay, Georgia, and the USS Ohio and USS Maine, homeported in Bangor, Washington.

The Navy said it will not identify the women until they have completed their submarine training. The 24, chosen from graduates of the U.S. Naval Academy, ROTC programs and Officer Candidate School, began their training in July, the military said.

Three women will serve aboard each sub at any one time, two as submarine officers and one as a supply officer. The subs have crews of 154. The Wyoming and Maine are ballistic-missile submarines and the Ohio and Georgia are armed with cruise missiles. Each of the submarines has two separate crews - known as the blue and gold crews - that rotate duty time so the subs can spend the maximum amount of time at sea.

Secretary of Defense Robert Gates told Congress in February that the Navy would take steps to put women aboard submarines.