U.S. swimmer dies during event in UAE: A 26-year-old member of the U.S. national swimming team died Saturday during an open-water race in the United Arab Emirates, according to event officials.

END_OF_DOCUMENT_TOKEN_TO_BE_REPLACED

An American lawyer who sparked a tuberculosis scare in 2007 after flying to Europe and back while infected with the disease can sue the U.S. government for privacy invasion, a federalÂ appeals court has ruled.

Andrew Speaker became the first American to be quarantined since 1963 for a rare form of tuberculosis after returning from his European wedding.

Speaker first tested positive for tuberculosis in March 2007, according to court documents. During his treatment, he alleges that the Centers for Disease Control and Prevention became aware of his travel plansÂ and assured him he was not contagious.

After he left, the CDC reclassified his tuberculosis as extensively drug-resistant, a more virulent strain, and urged him to return on aÂ chartered flight at his own expense.

END_OF_DOCUMENT_TOKEN_TO_BE_REPLACED

A juried selection of 25 YouTube videosÂ that represent "the most unique, innovative, groundbreaking video work" online in the past two yearsÂ debuted this week atÂ four Guggenheim museums and on YouTube.

The selected videos were among tens of thousands submitted in the global contest, YouTube Play: A Biennial of Creative Video, a collaborative effort between YouTube andÂ the Solomon R. Guggenheim Foundation to highlight talent from the digital realm, "regardless of genre, technique, background, or budget," to create the "ultimate YouTube playlist."

Selected by an 11-person panel of big-name artists, including director Darren Aronofsky, Japanese artist Takashi MurakamiÂ and indie-rock band Animal Collective, the winning submissions come from across the globe, including South Africa, Australia and Brazil, though the majority come from North America and Europe.

The selections representÂ a vast array ofÂ storytelling forms and digitalÂ mediums, from "deuce,"Â a stop-motion animation that portrays an awkward encounter between a man and a woman, to an Academy Award-nominated animated short that uses anÂ interview with John Lennon as the soundtrack called "I Met the Walrus."

A restaurant vestibule normally is a place for patrons to exchange greetings and hold the door for each other.

What occurred at an Atlanta restaurant last year turned into much more than that, with allegations of punches, kicks, racial invective and spitting.

Testimony providing two different views of the confrontation ended Friday in Clayton County Superior Court, with a man accused of punching and kicking a female patron at a Cracker Barrel restaurant agreeing to a plea deal and six months in jail.

A 26-year-old member of the U.S. national swimming team died Saturday during an open-water race in the United Arab Emirates, according to event officials.

Fran Crippen died during the last leg of the 10-kilometer Marathon Swimming World Cup in Fujairah, the International Swimming Federation (FINA) said in a press release.

The cause of death is under investigation, FINA said. Swimming World magazine reported that Crippen fell unconscious during the event and was found by deep-sea divers two hours later near the race's final buoy.

Wife who stabbed husband to death gets chance at probation 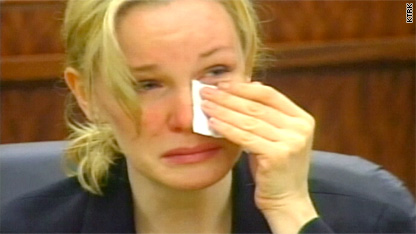 Susan Wright said she killed her husband in 2004 after years of physical and mental abuse.

ï»¿A Texas woman who was sentenced to prison for stabbing her husband more than 200 times may have a chance at probation as a second jury reconsiders her sentence.

Once dubbed the "blue-eyed butcher" in news accounts, Susan Wright is serving a 25-year sentence for stabbing her husband, Jeffrey, to death in 2003. During her murder trial the following year, Harris County District Attorneys alleged that Wright tied her husband to their bed during a seduction, dripped hot wax on his body and killed him.

An appellate court upheld Wright's conviction of first-degree murder but set aside her sentence, finding that her attorneys failed to do their job in the penalty phase of the case.

The mother of two from Houston faces a wide range of sentencing options, from probation to life in prison. The decision rests in the hands of a new 12-person jury.

An Austrian man who was Europe's first to use a mind-controlled artificial arm has died after an auto accident, European news agencies report.

Christian Kandlbauer, 23, died Thursday after his Subaru crashed into a tree and burst into flames near the Austrian resort town of Bad Waltersdorf on Tuesday, the Austrian Independent reported.

END_OF_DOCUMENT_TOKEN_TO_BE_REPLACED

A fast-moving cholera outbreak in Haiti has claimed at least 194 lives, according to a U.N. spokeswoman.

The country's health ministry is reporting another 2,364 cases from the recent outbreak, said Imogen Wall, spokeswoman for the U.N. Office for the Coordination of Humanitarian Affairs.

On Friday, officials with the U.S. Centers for Disease Control and the U.S. Agency for International Development discussed the outbreak and efforts to work out a containment strategy.

Typhoon Megi hit China on Saturday, sending hundreds of thousands fleeing as it made landfall in the southeastern province of Fujian, state media reported.

About 270,000 people have been evacuated, Xinhua news agency said.

The 13th typhoon to hit China this year made landfall in Zhangzhou city. It forced the cancellation of ferry services and 79 flights in the coastal city of Xiamen, authorities said.

It is expected to lose strength as it heads inland, but will bring heavy rains to southeastern provinces.

Classified military documents published on the WikiLeaks site increase the civilian death toll of the Iraq war by 15,000, anti-war activists said at a news conference Saturday.

"We have seen that there are approximately 15,000 never previously documented or known cases of civilians who have been killed by violence in Iraq," WikiLeaks editor-in-chief Julian Assange said.

Assange and others appeared at a news conference on Saturday in London, England, to discuss the release of nearly 400,000 classified military documents from the Iraq war by his whistle-blower website WikiLeaks.

"The attack on the truth by war begins long before war starts and continues long after a war ends," Assange said.

The publishing of nearly 400,000 classified military documents aims to reveal hidden truths about the Iraq war, the founder of WikiLeaks said Saturday. END_OF_DOCUMENT_TOKEN_TO_BE_REPLACED

Gunmen attacked the United Nations compound in Herat, Afghanistan, on Saturday, a spokesman for the local provincial governor said.