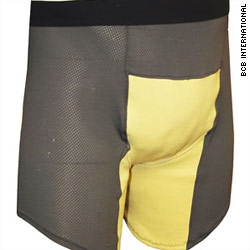 Military officials in a number of European countries are testing “blast boxers,” armored underwear that protect the groin from shrapnel, according to the garments' manufacturer.

BCB International, a Cardiff, Wales-based manufacturer of military and survival products, says the shorts could help reduce “life-changing” injuries to the genitalia and colon - the type caused by roadside bombs in Afghanistan.

The “blast boxers” can stop a projectile moving at 230 meters per second (about the speed of a small handgun bullet), according to the company’s website. Besides protecting the genitals, the shorts also are designed to protect the femoral artery, which, if punctured, can cause rapid blood loss and a quick death.

The protective zones of the boxers are made from Aramid fabric, the same kind of fabric sold under the trade name Kevlar. Lightweight mesh compromises the rest of the garments.

BCB says the boxers have been worn on a 10-mile run “without causing undue discomfort,” but it recommends wearing them over other underwear.

The “blast boxers” sells for about $86 each on the company’s website.

“All soldiers asked whom have recently returned from Afghanistan, confirmed that had the Blast Boxers been available for them, despite the added burden, they would have all, to a man, worn them,” the company says on its website.

“The missionaries were traveling by vehicle Saturday to Titanyen after visiting an orphanage in the Croix des Bouqutwitter.com/i/web/status/1…nTYo
susancandiotti

12:49 am ET October 17, 2021 RETWEET
“Up to 17 missionaries and their family members were taken by gangs in the capital as they were leaving an orphanagtwitter.com/i/web/status/1…yUqi
susancandiotti