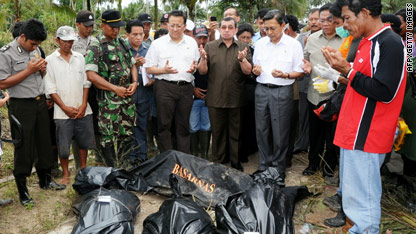 Death toll in Indonesia quake, tsunami - The death toll from a 7.7-magnitude earthquake that struck off Indonesia has risen to 272, officials said. Another 412 are missing after the Monday quake, which triggered a tsunami. It's unclear how many are dead or injured because information is still trickling in from remote parts of Indonesia, a country of myriad islands. There were reports of some villages being "flattened," according to the disaster management center in West Sumatra.

Massive storm system heads east - The eastern third of the U.S. can expect another blustery dayÂ as severe storms stretch from theÂ South to Delaware, the National Weather Service said. Wind could affect air traffic in the upper Midwest and sections of the Ohio Valley.Â Several states, including North Carolina, Alabama, Tennessee and Indiana,Â areÂ cleaningÂ up after storms this week spawnedÂ 24 possible tornadoes. Watch video from inside a tornado.Â

French retirement - AÂ controversial French pension reform bill could become law Wednesday, capping weeks of protests in the streets against the measure. The French Senate gave its final approval to the bill Tuesday, passing it 177-151 despite the nationwide protests. The lower house of parliament is due to vote on the bill Wednesday, the last legislative hurdle. The package would raise the retirement age from 60 to 62, among other measures. TheÂ government has said the changes areÂ necessary because the current system is unaffordable.

8:03 am ET January 18, 2021 RETWEET
"A battered nation haunted by sickness, death and division is heading into an epic week in which constitutional priâ€twitter.com/i/web/status/1â€¦A5
cnni