Queen Elizabeth II won't attend a reception at next week's COP26 summit, days after an overnight stay in the hospit‚Ätwitter.com/i/web/status/1‚Ä¶1Y

One of the January 6 rioters charged in the assault of DC Police Officer Michael Fanone will be released from jail‚Ätwitter.com/i/web/status/1‚Ä¶cA

A US judge has set a July 14 deadline for Prince Andrew to answer questions under oath in the civil sex assault cas‚Ätwitter.com/i/web/status/1‚Ä¶6I

'Phantom of the Fox' can live in Atlanta theater - for now 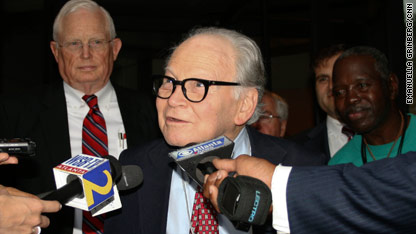 Joe Patten is fighting to stay in his apartment in Atlanta's Fox Theatre.

A longtime resident and caretaker of the famed Fox Theatre in Atlanta, Georgia, can keep living there while a legal dispute is settled over his residency at the historic landmark.

‚ÄúI‚Äôm tickled to death,‚Äù 83-year-old Joe Patten said Wednesday of the agreement to let him stay in his apartment in the Fox, the renowned entertainment venue where he has lived since 1979.

"It's wonderful. I was hoping it would turn out like this," Patten said, smiling broadly.

Patten, whom supporters have dubbed the ‚ÄúPhantom of the Fox,‚Äù sued the nonprofit Atlanta Landmark, Inc., the owner of the Fox, and President Woody White, in October, requesting they be prohibited from evicting him from his apartment.

Citing concerns over Patten's health and well-being, Atlanta Landmarks‚Äô board of trustees voted in August to terminate the lease, which meant Patten would have been required to leave by December 1.

Patten‚Äôs plight has struck a chord in Atlanta, where supporters of the Fox regard Patten as an icon and de facto custodian of the theater itself ‚Äì originally a Yaarab Temple Shrine Mosque that opened as an entertainment venue in 1929. To them, the case has become a human rights issue over whether Patten should be forced out of a home and institution to which he has devoted his life.

‚ÄúHe has fulfilled his duty to the theater with dedication and passion, and it is his wish to stay there until his dying day,‚Äù supporter Gordon Dyker said, waving a sign that read ‚ÄúWhat‚Äôs the Fabulous Fox without its Phantom?‚Äù outside the Fulton County Courthouse where the decision was announced Wednesday.

At issue for the court Wednesday morning was an injunction sought by Patten - the theater‚Äôs technical director from 1974 to 2001 - to allow him to remain in the 3,600-square-foot apartment until the dispute is resolved.

Dressed in a navy blazer, a blue shirt and thick, black-framed glasses, Patten awaited the announcement Wednesday morning with supporters in the front row of courtroom 4D in Fulton County Superior Court. A few rows behind them sat White and the Fox‚Äôs general manager, Allan Vella.

Patten‚Äôs supporters erupted in applause after Judge Jerry Baxter announced the decision, which he characterized as an agreement between both parties pending a hearing to resolve the matter.

"Both sides are working together to work this thing out, and it's my hope that they will be able to work it out," Baxter said.

The Fox Theatre said the parties agreed to keep Patten's original lease in place "for the time being."

"It has and it continues to be the intent of Atlanta Landmarks to allow Mr. Patten to live in the apartment as long as he is able," the Fox said in a statement. "We hope that today's proceedings will lead to a mutually beneficial resolution, which has always been our desire."

Patten‚Äôs cause has drawn fans from around the world on Facebook fan page, along with monetary donations, and his court appearance Wednesday attracted Atlanta eccentric Larry Platt, the "American Idol" contestant who became a viral video celebrity with the song ‚ÄúPants on the Ground.‚Äù

‚ÄúHe‚Äôs got a lifetime agreement. You can‚Äôt mess with that,‚Äù Platt said Wednesday outside the courtroom. ‚ÄúLeave the man alone.‚Äù

Patten‚Äôs relationship with the historic entertainment venue began in the 1960s, when he volunteered to help restore its ‚ÄúMighty Mo‚Äù organ, the second-largest theater organ in the world, according to the Fox. In the 1970s, Patten helped lead the ‚ÄúSave the Fox‚Äù campaign to save the theater from demolition.

In 1979, he entered into a lease agreement with Atlanta Landmarks, which permitted him to renovate an unused space in the Fox Theatre building at his own expense of $50,000 in exchange for the right to remain there until his death. The agreement also provided for the installation of a remote security monitoring system in Patten‚Äôs residence with the expectation that he alert and assist authorities in the event of an emergency.

His supporters credit his knowledge of the theater with helping to save it from a fire in 1996.

On August 30, Atlanta Landmarks passed a resolution to terminate the lease, citing the ‚Äúbest interests‚Äù of the company. In a letter to Patten, Atlanta Landmarks President Woody White expressed concern over his ‚Äúdeteriorating health‚Äù and the ‚Äúincreasing burden‚Äù it placed on theater staff.

‚ÄúWe are very concerned about your medical condition, and we continue to hope and pray that your condition will improve,‚Äù White wrote in a letter dated August 11. ‚ÄúAs good stewards of the Fox Theatre, however, our ongoing concerns for your health and our hopes for a full recovery must be weighed against our obligations to the Theatre and how your condition impacts the Theatre.‚Äù

By terminating the lease, Patten‚Äôs lawsuit claims the nonprofit and its president violated the Georgia Fair Housing Act by discriminating against him based on his ‚Äúperceived physical disabilities," his lawyer, Emmet Bondurand said.

The wedding between Japan's now-former Princess Mako and her college sweetheart was remarkably low-key. But the sub‚Ätwitter.com/i/web/status/1‚Ä¶dC
cnni

2:00 pm ET October 26, 2021 RETWEET
@ashleyn1cole Gurl you made me spit out my tea and laugh/snort. Time for a proper computer screen cleaning.
sarasidnerCNN

1:56 pm ET October 26, 2021 RETWEET
Do the people around you scream for Halloween and howl at horror movies while you hide your head in fright? There c‚Ätwitter.com/i/web/status/1‚Ä¶aN
cnni