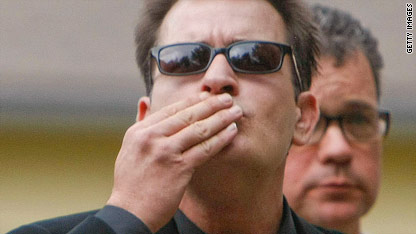 Charlie Sheen outside a Colorado courthouse on an unrelated matter in August.

Sheen back to work - WebPulse is trying to get today's post out quickly in case Charlie Sheen comes in the newsroom and tries to throw our computer across the room. Man! Everyone is reading about the actor who allegedly trashed his room at New York's Plaza Hotel. He was found  drunk  early Tuesday morning and was taken to a hospital, a source told People.

The incident was a bad reaction to medication, according to Mark Burg, Sheen's rep. Burg added that the "Two and A Half Men" star is heading back to work this week, and looking forward to it.

"Charlie will be working this week doing a cameo role, playing himself, in a small movie as a favor to a friend and has every intention of going back to work on 'Two and a Half Men' on Tuesday," Burg told People.

A Big Question – A Marie Claire writer is apologizing for writing a column earlier this week titled "Should 'Fatties' Get a Room?" Maura Kelly, who is now saying she suffered from anorexia, mused: "I think I'd be grossed out if I had to watch two characters with rolls and rolls of fat kissing each other ... because I'd be grossed out if I had to watch them doing anything." Outrage, outrage, everywhere. Magazine readers responded with 28,000 e-mails. The blogosphere lit up. Kelly was apparently writing in response to CNN.com's Lisa Respers France article this week about a new television show  featuring overweight people. Respers France explains what she thinks of Kelly's column.

Should it be socially acceptable to make fun of fat people? Respers France asks. We say no. That's what Charlie Sheen is for.

(Pow!) New 'Batman' named – A group of creatives pow-wow in a Hollywood office.

Cool Person Number 1: What should we call the next "Batman" movie?

Cool Person Number 1: No. It shall be called "Dark Knight...Rises."

And, scene. That's the big news from the superhero movie franchise front, according to an LA Times interview with director Christopher Nolan. Bam! Wham! Boom! Eh, yeah, we suppose.