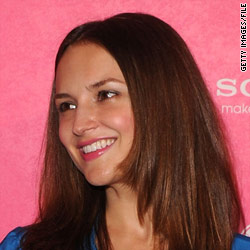 The 31-year-old actress from “She’s All That” is the latest voice in a chorus of complaints about how the media’s use of Photoshop is damaging to young women’s self-worth.

Cook has several allies in her fight, including the Creative Coalition, Girl Scouts of America, National Association of Broadcasters, Emmy Award winner Alfre Woodard and actresses Geena Davis and Teri Polo. The Creative Coalition recently released a PSA on the issue, featuring Cook.

Cook told Fox News recently that she battled her own body demons in 1995 after completing filming of “The Baby-Sitters Club.” Then 15, the actress put on 10 pounds over the course of the shoot and went too far to “try and get healthy,” she said.

“It breaks my heart to be part of an industry and part of a machine that really pushes out these images and propagates these really terrible standards that are false,” Cook told Fox.

This isn’t the first time she’s delved into advocacy. A few years back she did a memorable public service announcement in which she smashed up a kitchen with a frying pan to demonstrate heroin’s effects on the brain. She's also no stranger to sexy photo shoots.

A press release from the Creative Coalition cites a national survey from this year in which 90 percent of girls said the fashion industry put pressure on them to be thin - this, despite the realization by many respondents that models are too skinny, unrealistic or unhealthy.

“Nothing that you see is real, even if you look at what looks like a candid photo of someone, anything can be done. It is false advertising, and false advertising is a crime so why isn't this a crime?” she told Fox.

Last month, Gov. Arnold Schwarzenegger’s daughter, Katherine, made headlines with her first book, “Rock What You’ve Got: Secrets to Loving Your Inner and Outer Beauty.”

“You don’t have to look like you’re on a billboard to feel beautiful,” the 20-year-old first daughter of California said.

Almost eight months after his apparent suicide, the British fashion designer made news again when the Hells Angels Motorcycle Corp. filed suit against him, Saks and Zappos, citing trademark infringement and dilution.

“From more than half a century of continuous and conspicuous usage, both the Hells Angels word mark and the HAMC Death Head design mark are famous. The HAMC marks are widely known and recognized by the public as indicating the Hells Angels Motorcycle Club,” reads the complaint filed in California Central District Court.

The Hells Angels ask that McQueen’s company, which is owned by French fashion house PPR, pull back its allegedly infringing products and pay damages for fraud, malice and gross negligence, the amount of which would be determined at trial.

The notorious club, which insists it is not a gang, has protected its trademark turf before, suing the Walt Disney Co. over the movie “Wild Hogs” in 2006 and an Australian children’s clothing maker in 2009, according to Toronto's The Globe and Mail.

The senator from Quebec is speaking out once more against genocide and is focusing this time on the use of child soldiers on the battlefield.

The enterprising former lieutenant general has an interesting battle plan, aiming his latest ammunition at young men and women in high school and college, whom he calls the “under-25 gang.”

Dallaire told The Globe and Mail there are a quarter-million kids fighting in war zones, and "they’re in there slaughtering, drugged up, stolen from their families, killed, abandoned in the field when they’re injured and so on.”

He is asking the under-25 gang to read his new book, “They Fight Like Soldiers, They Die Like Children,” in hopes that it will “make them realize this is happening to their peers.”

He also expressed frustration that all his years as a military tactician doesn't provide an answer for how to combat the problem.

“How do I make that child, that gang of kids, that are being used by these adults, ineffective? How do I neutralize that force? If it were tank, I’d know what to use, but it’s not a tank. It’s a bunch of kids,” he told the newspaper.

Addressing African genocide has been on his humanitarian resume for some time. In 2004, his book on Rwanda earned him numerous international literary awards, and he has regularly and critically spoken of his time in charge of U.N. troops there.