Moderna has announced that the first participant has been dosed in the company's Phase 2 clinical trial of a corona‚Ätwitter.com/i/web/status/1‚Ä¶jx

The US and its allies are in talks to deploy more troops to Eastern European NATO members in a show of support as R‚Ätwitter.com/i/web/status/1‚Ä¶JR

The US Centers for Disease Control and Prevention plans to send a clear message to pharmacies on a conference call‚Ätwitter.com/i/web/status/1‚Ä¶iz

Two men were arrested in the English city of Manchester on Wednesday as part of the investigation into the hostage‚Ätwitter.com/i/web/status/1‚Ä¶N3

San Jose city council votes to adopt a first-in-the-nation ordinance requiring most gun owners to pay a fee and car‚Ätwitter.com/i/web/status/1‚Ä¶5Y 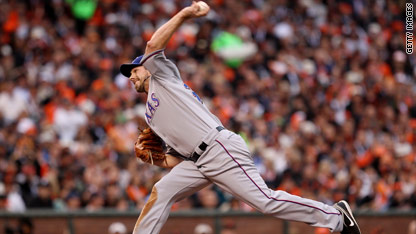 Cliff Lee, of the Texas Rangers, doing his thing.

Things didn't go quite as planned for the Texas Rangers last night. Game 1 of the World Series at San Francisco favored the hometown boys as the Giants routed Texas with a commanding 11-7 victory. In all fairness, as SI.com's Joe Posnaski writes, fans shouldn't think it's over for Cliff Lee and the boys after just one game. Remember the ALCS when they rallied and subsequently steamrolled the Yankees after a Game 1 loss? The Rangers have definitely been in this situation before and made it work.

But there is much to be said about how last night's game unfolded. Seemingly invincible Cliff Lee faltered, his 7-0 postseason record, 1.26 ERA, and 67-to-7 strikeout-to-walk ratio not holding up against monstrous hits from the Giants. Freddy Sanchez smacked a record-setting three doubles off of Lee bringing the score to 5-2 in the fifth, before the Rangers turned to reliever Darren O'Day. Maybe they should have just stuck with Lee because in the same inning, Juan Uribe knocked a three-run homer bringing the Giants to a commanding 8-2 lead. Though the Rangers attempted to rally later, it simply wasn't enough.

The loss was not only a knock against a team expected to take a dominant role in the series, but it also chipped away at Lee's aura of invincibility, which could end up hurting the team where it matters most.

Rangers vs. Giants (7:57 p.m., ET, FOX) - After last night's disappointing loss, the Rangers look to even up the Series before heading back to Texas on Thursday. All eyes will be on pitchers Cliff Lee and Tim Lincecum, who struggled mightily in Game 1.

30 - Number of points Dwyane Wade scored in the Heat's first victory of the season against the Sixers. After a disappointing loss to the Celtics, the Heat rebounded in their 97-87 rout of Philadelphia.

2344 - Number of passing yards Philip Rivers has racked up this season.

12:26 pm ET January 26, 2022 RETWEET
Justice Stephen Breyer is retiring from the US Supreme Court. A while back Biden pledged to nominate a black woma‚Ätwitter.com/i/web/status/1‚Ä¶O6
sarasidnerCNN

12:05 pm ET January 26, 2022 RETWEET
Spotted in LA ‚@wkamaubellll‚Å© is at it again. Talking about the issues that make people uncomfortable. And I‚Äôm hetwitter.com/i/web/status/1‚Ä¶vOxfIHsG
sarasidnerCNN