Swiss use steamroller to make statement on counterfeiting 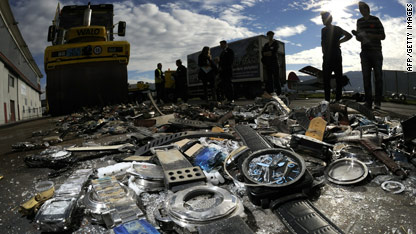 Fake goods were crushed to make a statement against counterfeiting Thursday.

Thousands of watches, CDs and DVDs were crushed by a steamroller Thursday as part of a Swiss campaign against counterfeit goods.

The smashing of the counterfeit goods at an airport in Bern, Switzerland, highlighted Stop Piracy Day 2010 and launched the Swiss Anti-Counterfeiting and Piracy Platform’s “Piracy is Cruel” campaign.

The public-private Swiss group is trying to educate consumers on how purchasing goods they know to be counterfeit puts themselves and others in danger.

“Consumers who use or buy counterfeit goods also care too little about the consequences of their actions,” the group said in a press release.

A study by the International Chamber of Commerce released in March estimated that in 2008 more than 185,000 jobs were lost in Europe to counterfeiting, file sharing and piracy in creative industries such as music, TV and filmmaking. That number could balloon to 1.2 million by 2015 without new enforcement, the study said.

In the U.S. on Wednesday, the file-sharing site LimeWire was shut down by order of a federal judge who agreed with plaintiffs in a suit that alleged the site promoted copyright infringement.

Earlier this month, Interpol and other international agencies reported seizing more than a million illicit and counterfeit pills worth $2.6 million while shutting down 290 websites involved in marketing counterfeit medicines. Seventy-six people were arrested or are under investigation as a result of that weeklong campaign in 45 countries.