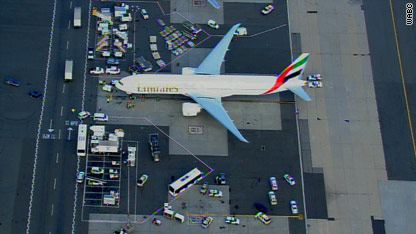 [Update 4:00 p.m.] Emirates Airline has issued a statement regarding the origin of the flight:

"Emirates Flight EK201, which has just landed at JFK, originated in Dubai not in Yemen, as reported in the US media. More information will follow as soon as we have it. Emirates is co-operating fully with the US authorities."

[Update 3:11 p.m.] NORAD is escorting a passenger flight from the United Arab Emirates to New York's JFK airport “out of an abundance of caution,” a NORAD spokesman said.

Two Canadian CF-18s began to track a civilian aircraft that was “determined to be an aircraft of interest” as it flew over Canadian airspace, spokesman John Cornelio said.

Two US F-15s then picked up the escort to JFK, which is ongoing.

A law enforcement source says that the flight being escorted is Emirates 201.  The flight originated in Sanaa, Yemen, yesterday and is en route from Dubai to JFK, according to Emirates Airline.

"This is only because there is cargo from Yemen on the flight.  There is no known threat associated with this cargo or this flight,” he said.