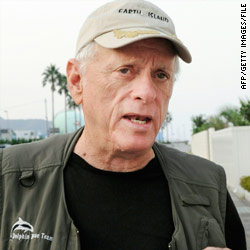 Dolphin activist Ric O’Barry, subject of the 2009 Oscar-winning documentary “The Cove,” will meet Tuesday with officials from the Japanese city of Taiji, where hundreds of dolphins are slaughtered each year after being herded into a secluded bay.

The meeting comes as part of a forum organized by the Association to Contemplate Taiji's Dolphin Hunt. The group, which includes the local fisheries union as well as politicians, says it’s not seeking a debate on the slaughter but rather hopes to “exchange relevant particulars in the first instance,” according to an Agence-France Presse report.

O’Barry, who once trained dolphins on the 1960s' TV show “Flipper,” said he and his Earth Island Institute “will continue to address these issues with respect for the people of Japan and will work with them to solve these problems.”

On his blog, he called on Japan’s government to tell its citizens what’s happening in Taiji, where he said the fishermen capture some of the dolphins for sale to aquariums and stab to death the rest.

“The Japanese people must be made aware of the killing of dolphins, which has been covered up by their government. ... The dolphin slaughter cannot be a Japanese cultural practice if the vast majority of the Japanese people don’t even know it is happening,” he said.

The meeting is open to the media but not to the public, according to AFP.

The owner of the NFL’s Dallas Cowboys apologized to fans of “America’s Team” after Sunday's 35-17 loss to the Jacksonville Jaguars put them at 1-6 and at the bottom of the NFC East.

Jones said he was “embarrassed” and “dumbfounded” by the team’s losing ways, according to reports. Many experts had picked the Cowboys, with a boatload of stars on the payroll and a shiny new stadium, to win their division and possibly the Super Bowl this season.

"I'm very, very, very sorry to our fans. You should have better than this," Jones said at a post-game news conference. “I should have and do take the ultimate, ultimate responsibility.”

The team’s record is its worst since Jones took over in 1989. The Cowboys finished 1-15 that year.

For this year’s Cowboys, there may not be any immediate relief in sight. Next up is a visit to Lambeau Field to face the Green Bay Packers, who shut out the New York Jets 9-0 on Sunday.

The founder of ImClone Systems was sentenced in 2003 to more than seven years in prison and $4.3 million in fines for committing fraud and perjury. The federal judge in the case said Waksal had exhibited a “pattern of lawlessness and arrogance," according to a report at the time in the New York Daily News.

More people likely will remember an indictment that came a week ahead of Waksal’s sentencing. Martha Stewart was accused of securities fraud and other charges in connection with her sale of 4,000 ImClone shares the day before the stock plummeted. She eventually was imprisoned as well.

Waksal, who was released last year, is now focusing on his Kadmon Pharmaceuticals, which was “founded on its expertise of novel science,” according to a press release.

Though Hepatitis C therapies will be a company focus, Kadmon also will collaborate with universities and private companies to pioneer “medicines in the areas of oncology, infectious diseases and immunology.”

The New York Times reported that, despite being an ex-con, Waksal hasn’t had much trouble finding investors, and several reports indicate Kadmon isn’t having problems forging deals and alliances.

Waksal, for his part, lives far less lavishly than he did before his imprisonment, telling the Times that “I’m far more circumspect in every single thing I do in life.”