The Dow tops 30,000 for the first time ever as Biden transition begins cnn.it/2HveEPx 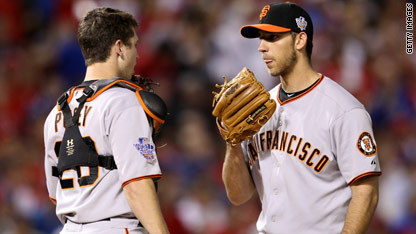 Madison Bumgarner and Buster Posey were keys to the Giants' win.

But then came Madison Bumgarner and Buster Posey. The two San Francisco Giants rookies displayed a level of skill and sophisticated play that silenced the Rangers in a 4-0 loss. Bumgarner managed to pitch eight shutout innings and became the fifth youngest pitcher to ever start in a World Series game.

SI.comâ€™s Joe Lemire explains how the duo could be the cornerstone for championship Giants teams in the future. "With the young pitching this team has and Buster behind the plate, this team has a chance to do something special for quite some time," said first baseman Aubrey Huff.

But the Rangers are most certainly not concerned with future competition from Bumgarner and Posey. The team is now frantically trying to find a way to battle back against the incredibly dominant boys from San Francisco to notch themselves a Game 5 victory to stay in the series. Will it happen tonight? Anythingâ€™s possible, but if the beginning of the series in any indication, it could be a good day in San Francisco tomorrow.

Needless to say all eyes will be watching the Rangers desperately try to hold on to their championship hopes tonight at Rangers Ballpark.

281- Number of consecutive weeks Tiger Woods held the number 1 ranking. His streak was ended by Englandâ€™s Lee Westwood, who is assuming the top spot for the first time in his career.

87- Number of lead changes during the seventh race of the Sprint Cupâ€™s Chase for the Championship at Talladega. Ultimately, Clint Bowyer rolled into Victory Lane, while Kevin Harvick took second. Four-time champ Jimmie Johnson held on to his points lead. SI.comâ€™s Tom Bowles breaks down five things he learned from Sundayâ€™s race

80- Ramsâ€™ wide receiver Isaac Bruceâ€™s that was retired by the organization before Sundayâ€™s game against Carolina. Bruce spent 14 seasons with the Rams and holds the records for most career receptions, careers yards receiving and touchdown catches.

China successfully launched its Chang'e-5 lunar mission to collect rocks from the moon â€” the first attempt by any ctwitter.com/i/web/status/1â€¦8UNo
cnni

1:12 pm ET November 24, 2020 RETWEET
â€śThe certification comes just one day after all of Pennsylvania's 67 counties, under law, had to receive precinct rtwitter.com/i/web/status/1â€¦z1th
susancandiotti

11:41 am ET November 24, 2020 RETWEET
This Thanksgiving will definitely "feel" different, and that's not all due to Mother Nature. With many family gatheâ€twitter.com/i/web/status/1â€¦5p
CNNweather

11:07 am ET November 24, 2020 RETWEET
"Looking at the problems in society, and especially those of social justice, sport can be a good means of resolvingâ€twitter.com/i/web/status/1â€¦SF
cnni