Bark takes a bite out of crime 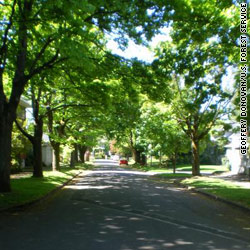 A study found that neighborhoods with large trees have less crime than those with small trees.

Plant a tree and stop crime? Depends on the size of the tree.

That's what a study from researchers with the U.S. Forest Service's Pacific Northwest and Southern Research Stations has found.

The study, being published in the journal Environment and Behavior, found that large trees tend to keep criminals out of residential properties while crime was higher on properties with smaller trees.

The researchers looked at a sample of more than 2,800 homes in the Portland, Oregon, area and associated crime data from 2005 to 2007. There were 394 property and 37 violent crimes at those 2,813 single-family homes during that time period.

Researchers then looked at aerial photos and ground surveys to gauge the number and size of trees associated with the properties.

"We believe that large street trees can reduce crime by signaling to a potential criminal that a neighborhood is better cared for and, therefore, a criminal is more likely to be caught," lead researcher Geoffrey Donovan said in a statement. "Large yard trees also were associated with lower crime rates, most likely because they are less view-obstructing than smaller trees."

"It was exciting to see that they did," said Donovan, who worked on the study with Jeffrey Prestemon.

And trees bring something else, too, he said. "Although a burglar alarm may deter criminals, it won't provide shade on a hot summer day, and it certainly isn't as nice to look at as a tree."

11:00 am ET February 25, 2021 RETWEET
"I fear London may get a big surprise when it reopens." Pest controllers say that, as many buildings in London's câ€twitter.com/i/web/status/1â€¦JL
cnni

10:45 am ET February 25, 2021 RETWEET
Some of the same parts of the South that experienced record snow and cold last week are now in for heavy rain, whicâ€twitter.com/i/web/status/1â€¦X3
CNNweather