Search teams have discovered a bone that may be related to the disappearance of 10-year-old Zahra Baker, police in North Carolina said Wednesday.

The bone will be sent to the medical examiner's office in Chapel Hill for further examination, the Hickory Police Department said.

In the past week, the Hickory Police Department said it has recovered key pieces of evidence in the search for the 10-year-old cancer survivor, who was reported missing by her stepmother on October 9. 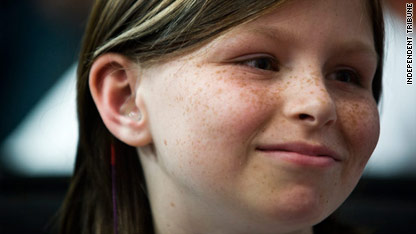 Zahra Baker was reported missing by her stepmother October 9.

Police on Monday confirmed that a prosthetic leg found last week in a brushy area off a road belonged to Zahra, who lost her leg to bone cancer when she was 5.

Also last week, employees at an environmental landfill found a mattress thought to have belonged to Zahra. Investigators believe the mattress was disposed of days before Zahra was reported missing, and hoped to use it to reinforce the timeline of her disappearance.  DNA tests on the mattress are being performed.

The discovery of the bone also comes two days after a Catawba County grand jury indicted Zahra's stepmother, Elisa Baker, on an obstruction of justice charge related to the search for Zahra.

The charge stems from a fake ransom note that authorities say Baker admitted to writing to distract police from the search for Zahra.

Zahra's father, Adam Baker, is in custody on charges of submitting worthless checks and failing to appear in court.

Police earlier acknowledged that he faced bad-check charges, which are unrelated to the disappearance of his daughter. But they did not initially arrest him, as he had been helping authorities in their search.

The disappearance of Zahra, who was hearing impaired and had persevered through numerous health battles, has made international headlines.

Baker and his daughter, who are from Australia, moved to the United States after he met his future wife, Elisa Baker, online.

Meanwhile Wednesday, crews continued to search for evidence near the lake where Zahra's prosthesis was found, CNN affiliate WBTV reported.