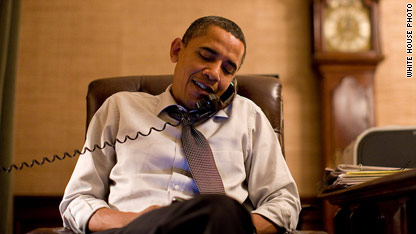 In a phone call with Rep. John Boehner, incoming Speaker of the House of Representatives, after Tuesday's election results were in, President Obama said he was "looking forward to working with him and the Republicans to find common ground, move the country forward and get things done for the American people," the White House announced in a press release Tuesday night.

Here's Boehner's account of the phone call, according to his press office:

"President Obama called Leader Boehner at midnight to congratulate him. They had a brief but pleasant conversation. Leader Boehner said he's always been straightforward and honest with the president in the past, and said that's the way he'll continue to be with the president in the future. They discussed working together to focus on the top priorities of the American people, which Boehner has identified as creating jobs and cutting spending. "That's what they expect," Boehner said. He thanked the president for the call."