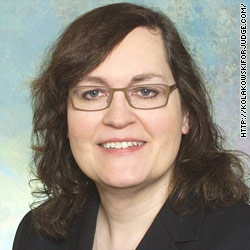 Victoria Kolakowski, a candidate for Alameda County Superior Court judge in California, is holding a slight lead over opponent John Creighton and will become the first transgender judge in the nation if she wins.

The 49-year-old has been a lawyer since 1989 and has dealt with copyright, business and patent cases. According to the San Francisco Chronicle, Kolakowski had sex reassignment surgery in 1991. When the state Supreme Court declared same-sex marriages legal there in 2008, she married her partner, a woman, the Chronicle reported.

On her website, Kolakowski said she wants "to be clear that I am not asking voters to elect me simply because I am transgender."

However, she said that her being transgender would help the community to "see people like me as respectable professionals and even colleagues, and not as 'freaks.'

"Therefore I am passionate about blazing this trail for my community," she wrote. "I have been very fortunate to have a successful career as a public servant, and I feel an obligation to serve my community as a role model as well."

Larry Smith, the New York-based creator of the "Six-Word Memoir" and editor of Smith Magazine, began collecting and tweeting often funny, always profound personal submissions about four years ago. The premise? Everyone has a story. The endeavor has resulted in multiple book versions of the project, including a best-seller.

On Wednesday, Smith began his most personal endeavor to date: Working with the Iraq and Afghanistan Veterans of America to collect submissions from members of the military in time for Veterans Day. They are equally tragic and hopeful.

"Gone to war, home to hatred." - By Sidneymarie

"Spell war backwards and get raw." - By Salvatore_Buttaci

"I would do it all again." - By Jason Madaus

Ryo Ishikawa, 19, is a household name in his native Japan, but unless you are a golf fan, it's unlikely you will have heard of him. Many fans in Japan claim he can match the golfing achievements of his idol - 14-time major winner Tiger Woods.

He recently passed the legendary Seve Ballesteros by nearly four years to become the youngest winner on a major professional golf circuit, and has also become the youngest player to break into the world's top 100, then the top 50, breaking Woods' records; certainly good company to be in at his age.

He travels with an entourage, is pursued by swarms of media, and he already has a public museum in which to put all his trophies.

Every week, hundreds of people pay to see him. It's no wonder that his motto is "world, here I come."