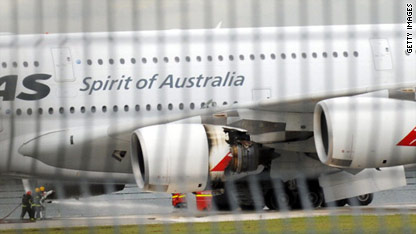 The Qantas plane at Singapore

Qantas emergency landing - A Qantas Airbus A380 superjumbo made an emergency landing in Singapore with 459 people aboard, after one of its four engines failed over western Indonesia.Â  The airline has grounded its fleet of six A380s until an investigation is complete. Read the full story

Chinese president visits France - Chinese President Hu Jintao is scheduled to pay a working visit to France. France and China have been in talks for the past year over whether there should be heightened co-ordination of exchange rates to promote stability of the international monetary system in the wake of the financial crisis. Mr Hu is expected to meet the French president, Nicolas Sarkozy, and other senior political figures for talks.

Xbox launches Kinect - The new Xbox Kinect is due to be released in the U.S. today and on November 10 in Europe. Kinect allows gamers to interact with the game by moving their body in front of an advanced camera. Jim Boulden takes a look at how this will change the gaming industry, and the large amount of cash the games generate each year.

Zimbabwe investment - Zimbabwe's ministers of finance and indigenization are in South Africa Thursday to declare their country open for business. But analysts say until Zimbabwe has a credible government that can restore law and order, calls for increased trade will not be heeded. A law forcing foreign companies to give away majority stakes to black Zimbabweans has recently worsened the situation.Â Â

Silicon Valley in East London? - British PM David Cameron, in a speech to an audience of high-tech businesses and entrepreneurs, will announceÂ the governmentâ€™s ambition for Londonâ€™s East End to be transformed into a world-leading technology city to rival Silicon Valley.

Israel-UK spat â€“ UK Foreign Secretary William Hague has moved to smooth over a diplomatic row with Israel, promising swift action to stop pro-Palestinian protesters targeting its officials with arrest warrants when they visit the country.Â

"The message of this season is the potential of the smallest bit of light to push back the darkness." | Opinion cnn.it/3D3gLB0
cnni

11:15 pm ET November 28, 2021 RETWEET
Adele has made another record-breaking return to the charts, as her latest album "30" claims the title of fastest-sâ€twitter.com/i/web/status/1â€¦Tv
cnni