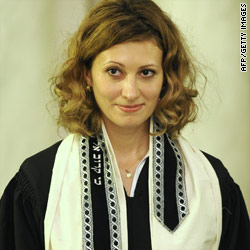 Treiger, who was born in Ukraine but moved to Berlin, Germany,Â in 2001, was ordained before an audience that included 30 prominent rabbis from around the world, some of whom are women, the report said.

Treiger will lead the Jewish communities in the cities of Oldenburg and Delmenhorst in Lower Saxony but will not be recognized as a rabbi by Orthodox Jews, who reject the ordination of women, according to The Local.

Regina Jonas, the last woman to be ordained a rabbi in Germany, died in 1944 at Auschwitz, the Nazi concentration camp in Poland, the report said.

A Canadian couple who won an $11 million lottery jackpot say they're "just country hicks" who really don't need that kind of money, so they've given most of it away, ď»żThe Canadian Press reported.

Allen and Violet Large have been married for 36 years, live in a 147-year-old house in Lower Truro, Nova Scotia, drive a 1987 Dodge Diplomat and say they don't need much else, according to Canadian media reports.

"We have each other - that's the main thing. We don't live in a modern house or have new cars, no fandangle things. You're born with nothing, you're going to die the same way," Violet told The Canadian Press.

The bulk of the money has gone to more than 70 charities, including churches, fire departments and hospitals. They kept 2 percent - about $220,000 - to tide them over and give a little something to relatives, media reports say.

"We were sitting quite well before we ever won this money. We weren't millionaires, but we were well to do,"Â  Allen Large, 75, told The Canadian Press.

Violet Large, 78, is recovering from chemotherapy for ovarian cancer, but the couple said they knew the money couldn't help her health, the CBC reported. And without it to worry about, she can concentrate on recovering.

"It could be worse because I'm not bedfast, and I haven't been sick to my stomach, so I'm very fortunate," she told the CBC.Â  "We made the donations, which really has perked us up."

And it seems they just enjoy playing the lottery. They said they'll still be buying tickets, the CBC said.

Ethan Zohn, a former professional soccer player and winner of "Survivor: Africa" in 2002, will run the New York City Marathon this weekend as a cancer survivor, the New York Daily News reports.

Zohn was diagnosed with a rare form of Hodgkin's Lymphoma in April 2009 but was declared cancer free in May of this year, according to the newspaper.

He and his 49 teammates are running this weekend to help fight another disease - HIV/AIDS, the Daily News said. They hope to raise $200,000 for Zohn's GrassrootSoccer, which teaches soccer professionals in Africa how to educate kids about HIV through soccer drills, the paper reported.

"I realize every step I'm taking and the pounding on the pavement is not just for me. It's for all the people who have been through cancer and all the kids in Africa who are dying of AIDS. I'm not just running for myself," he told the Daily News.

4:07 pm ET September 23, 2021 RETWEET
The US is working on contingency plans if Iran continues to make nuclear advances and fails to return to internatioâ€twitter.com/i/web/status/1â€¦rp
cnni

3:30 pm ET September 23, 2021 RETWEET
A new show at Sotheby's New York spotlights the work of over 20 Black jewelers, from contemporary artisans to the oâ€twitter.com/i/web/status/1â€¦k6
cnni