Sports: Did a Cam Newton rep ask school to pay? 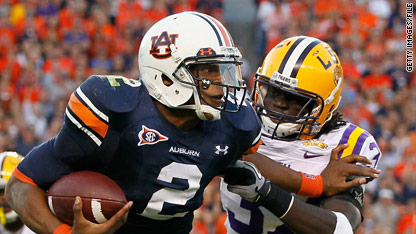 Just when you'd forgotten about the various scandals rocking college football comes another one bigger and badder than the last.

Former Mississippi State quarterback John Bond told ESPN.com that a former teammate of his, Kenny Rogers, requested $180,000 from the school in exchange for Newton's selecting Mississippi as the school he would transfer to from junior college. Mississippi State declined the offer and reported Rogers to the SEC almost immediately.

Newton's family and Auburn have denied any involvement, but SI.com's Stewart Mandel writes the damage might already have been done.

"Whether guilty or innocent, the presumptive Heisman front-runner now carries an inescapable stigma," writes Mandel. "The kid with the big smile and postgame exuberance, the highlight-reel runs and pass-efficiency prowess, is now linked to the ugly words 'extra benefits' and the eye-popping number $200,000" (the amount Rogers claimed "other schools" had offered).

The report of Newton's crooked recruitment reminds college football fans little is sacred anymore. Today's feel-good story often turns into tomorrow's gut-wrenching reality. But unlike other scandals that have plagued college football this season, this one puts in question whether the best player in the nation can play out the rest of the season.

"The fact it's even become a question is yet another unfortunate, unsurprising window into the underbelly of college football," adds Mandel. "And another agent-related scandal is always lurking around the corner."

Auburn is scheduled to host Chattanooga on Saturday. Here's some of the action going on around the sporting world today (all times Eastern):

Chicago Bulls at Boston Celtics (8 p.m., ESPN) The Bulls look to rebound from a home loss to the Knicks last night. They face the Celtics, who defeated them 4-1 last season in the first round of the playoffs.

28 – Points and 11 rebounds each for Kevin Durant and Russell Westbrook in the Thunder's 107-106 overtime victory over the Trail Blazers on Thursday.

8 – Of the 10 NFL teams currently holding at least a share of their division lead did not win their division last season. SI.com's Don Banks writes about that trend and more in his NFL Midseason Report.