One of the two charter planes carrying Americans who were evacuated from the Diamond Princess cruise ship has landeātwitter.com/i/web/status/1ā¦EO

Fourteen Americans from the Diamond Princess who are on government charter flights back to the US have tested positātwitter.com/i/web/status/1ā¦1N

The Daytona 500 NASCAR race has been postponed until Monday at 4 p.m. ET because of rainy weatherātwitter.com/i/web/status/1ā¦p1

100 people died due to the coronavirus in China's Hubei province Sunday, bringing the global death toll to 1,770. Mātwitter.com/i/web/status/1ā¦aW

Americans who were quarantined on the Diamond Princess cruise ship leave Japan as two charter planes take off for tātwitter.com/i/web/status/1ā¦Fm

President Trump opens the Daytona 500 with a lap around the speedway and a command to drivers to "start your engineātwitter.com/i/web/status/1ā¦u3 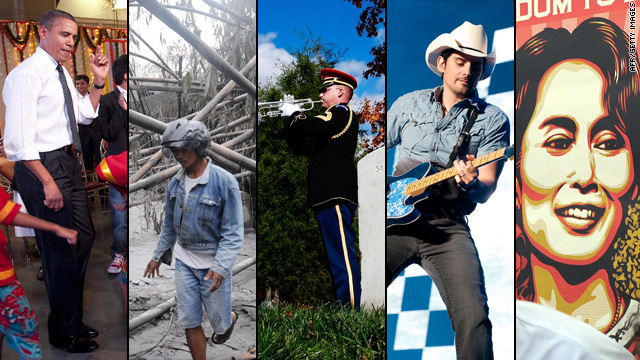 Many of this week's major stories come from Asia, and not just because President Obama's tour of the continent has already spawned one viral video that will probably follow him for the rest of his life.

After leaving India, the president is scheduled to stop inĀ Indonesia before heading to South Korea for a G-20 meeting in Seoul Thursday and Friday. Expect heated rhetoric directed at the United States from emerging powers over their fluctuating currency values and widening trade imbalances.

Obama's next stop will be Japan for a meeting Friday to Sunday of the Asia-Pacific Economic Cooperation (APEC), an annual forum that deals with economic growth, trade and investment in the region.

Over in Indonesia, anti-Obama protests already have taken place in the nation's capitol before his planned visit. It's unclear, however, Ā if recent volcanic activity in the beleaguered country will change the president's plans.

The country continues to take stock of the damage exacted by the unpredictableĀ Mount Merapi, whichĀ continued to rumble and emit bursts of blisteringly hot gas and dust Sunday. At least 156 people have died since Merapi started erupting on October 26,Ā and the death toll continues to rise. Relief agencies estimate about 200,000 people have been displaced.

All this comes a just week after a 7.7-magnitude earthquake hit Indonesia's coast, triggering a tsunami that killed at least 449 people and left hundreds more injured. CNN.com will have the latest developments, thanks in large part to our stalwart team of iReporters in the region, who provide us with up-close-and-personal images and stories from the scene.

The eyes of the world will also be on Myanmar this week, as two majorĀ political developments take shape.

Counting was under way Sunday in the country's first election in 20 years, a poll that critics say isĀ merely a facade aimed at creating the illusion of democracy.

The timing of the election is curious, as it falls just a few days before one of the country's most high-profile political prisoners is set to be freed Thursday. Nobel Peace Prize-winning democracy activist Aung San Suu Kyi's party won a landslide election victory in 1990, but the military junta rejected the results. (For the record, she did not vote in the election). Suu Kyi's current house arrest is scheduled to end Thursday, but her lawyers are skeptical that the military junta will release her.Ā Stay tuned to CNN for the latest.

Back stateside, CNN will be covering Thursday's events in honor of Veterans' Day, as the nation pays tribute to those who have served our country andĀ continue to do so.

Our own recent (and politically fraught in its own right) midterm election is behind us, but we have a long road ofĀ fallout to look forward to. What will become of the ObamaĀ administration's health care legislation? Will outgoing House Speaker Nancy Pelosi become minority leader? Are they STILL counting votes in Alaska? The first two questions are up for grabs, and yes, the Alaska Division of Elections plans to count absentee ballots in the U.S. Senate race on Tuesday, and move on to the hand count of the write-in votes the following day. The count of the write-in ballots is expected to take about three days, and CNN's Political Team will have the latest.

Our photo of the week: Mount Merapi, Indonesia

We're also proud to feature this impressive collection of iReporters' time-lapse videos from cities around the world, as part of CNNI's Urban Planet special, which looks at the rise of mega cities and other phenomena associated with urban living. You can track urban population growth where you live, using our interactive "heat map," and check back in later this week for a feature on the documentary, "Detroit Wild City," which charts the decay of the Motor City and its reclamation by vegetation and wilderness.

The criminal justice system is always at work, as the Connecticut jury deliberating the fate of convicted killer Steven Hayes proved this weekend. The jury met Saturday and Sunday to consider whether Hayes deserves the death penalty for killing Jennifer Hawke-Petit and her daughters, Michaela and Hayley, during a home invasion that ended with their home in flames. The jury will resume deliberations Monday at 10 a.m. ET

After a brief delay, opening statements are scheduled for Monday in the federal trial of Brian Mitchell, who is accused of abducting Elizabeth Smart in 2002 and keeping her as hisĀ child bride for nine months.

A preliminary hearing is also scheduled Thursday in the case of James Arthur Ray, the self-help guru who pleaded not guilty to manslaughter charges in the deaths of three participants at an Arizona sweat lodge ceremony he organized last year.

Why are so many answering the 'Call of Duty'? CNNTech looks at "Call of Duty: Black Ops," the latest in the gritty warfare series that is expected to be the biggest-selling videogame of the year.

On Monday, CNNHealth will look at a report revealingĀ  the nutritional content of fast food meals and how the industry marketsĀ  products to kids.

We all know about the "sandwich generation," of people who care for aging parents as well as their own children. This week, you'll meet a surprising, new group caring forĀ  people with Alzheimer's disease and dementia.

And, we'll explain "mindfulness,"Ā the Buddhist concept of being aware of one's feelings, breath, and consciousness, that plays a central role in meditation. It's increasingly becoming part of Western psychology, as therapists use it to help people curb their destructive thoughts and behaviors.

Team Coco's devoteesĀ can finally let out those collective squeals of glee as funnyman Conan O'Brien returns to air Monday at 11 p.m. ET on TBS, which is owned by Turner Broadcasting, the same parent company as CNN.

It's hard to believe it has been 30 years since Strawberry Shortcake wafted into our nostrils, rendering consumers permanently tantalized by her aroma. To commemorate the anniversary, Hasbro has created (scented!) classic replica dolls of Strawberry Shortcake along with her friendsm, Orange Blossom and Raspberry Tart. On Monday,Ā Showbiz brings you interviews with two Strawberry Shortcake insiders about the characterās history and longstanding appeal.

With the premiere of the "Harry Potter and the Deathly Hallows" filmĀ less than two weeks away, iReport is taking your questions for the film's stars before they visit our studios Tuesday, so get 'em in asap!

At least 112 people were killed and 502 others were missing after a 7.7-magnitude earthquake struck off Sumatra on Monday and triggered a tsunami, Indonesian officials said.

In its latest move to jump start the sluggish recovery, the Federal Reserve announced it will pump billions into the economy through a move known asĀ quantitative easing.

Canadian authorities are investigating an "unbelievable" incident in which a man disguised as an elderly man boarded anĀ international flight, according to a confidential alert obtained by CNN.

Federal health officials are warning consumers to avoid cheese sold at Costco in five states tied to an E. coli outbreak that has left 25 people sick.

When former transit officer Johannes Mehserle was sentenced to two years for fatally shooting an unarmed man, protesters in Oakland, California responded with marches and protests that turned violent, officials said.Ā Mehserle will receive credit for time served for killing Oscar Grant, which means he could end up spending less than seven months in custody.

9:04 am ET February 17, 2020 RETWEET
Football fans in Germany united on Sunday to chant "Nazis out" as a single racist fan was identified and removed. Hātwitter.com/i/web/status/1ā¦OR
cnni

8:59 am ET February 17, 2020 RETWEET
Jennifer Hudson belted out a stunning rendition of "For All We Know (We May Meet Again)" in tribute to Kobe Bryantātwitter.com/i/web/status/1ā¦Ve
cnni

8:49 am ET February 17, 2020 RETWEET
She's one of more than 300 American passengers who were evacuated from the novel coronavirus-struck Diamond Princesātwitter.com/i/web/status/1ā¦Z9
cnni

8:39 am ET February 17, 2020 RETWEET
The operator of the Westerdam cruise ship, which was stranded for days at sea before it was allowed to dock in Cambātwitter.com/i/web/status/1ā¦Fb
cnni