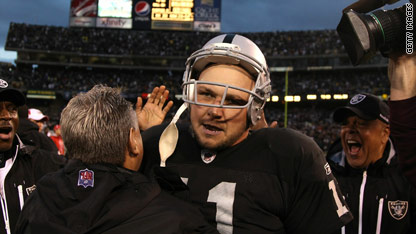 The NFL's Oakland Raiders pulled out a 23-20 overtime win over division-leading Kansas City, putting the Raiders above .500 in November for the first time since Rich Gannon was calling the signals in 2002.

The Raiders trailed by 10 points at the half.

"In the past, a lot of Raiders teams would have folded in a game like today," Oakland offensive lineman Khalif Barnes said. "People would have been like, 'Same old Raiders again.'

"But this team, even when it was down today, it just kept doing what it needed to do on offense and defense and special teams. We just kept playing."

SI.com's Don Banks in his Snap Judgments says this victory against an improved Kansas City squad could be a turning point for Oakland as the team is now just half a game behind the Chiefs in the AFC West. The Raiders have won three in a row and are unbeaten within the division, but can they keep up the momentum?

There is plenty of NBA action on tap tonight:

Denver Nuggets vs. Chicago Bulls (8 p.m.) – Carmelo Anthony and the Denver Nuggets will take on Joakim Noah and the Chicago Bulls as Denver looks for its third straight win. But with injuries sidelining Kenyon Martin and Chris Andersen, it won't be easy.

$50,000 – amount Charlotte Bobcats guard Stephen Jackson was fined after verbally abusing a ref. "Everybody should be shocked – $50,000?" Jackson said. "If you all saw what happened, $50,000, that's a lot of money. But welcome to the life of Stephen Jackson."

5:22 pm ET September 24, 2021 RETWEET
US President Biden has determined he will not assert executive privilege to shield Trump-era records from being seeâ€twitter.com/i/web/status/1â€¦BN
cnni

5:03 pm ET September 24, 2021 RETWEET
The latest battle in office life may be over whether or not to keep the camera on during virtual meetings. cnn.it/3lVLPfm
cnni