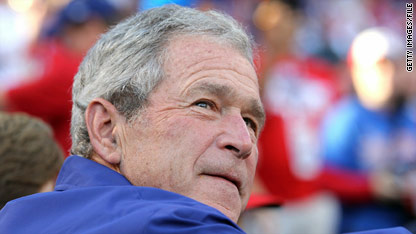 After staying largely mum on the political scene since leaving office almost two years ago, President George W. Bush will reveal his thoughts on the most historic - and controversial - parts of his presidency with the release of his memoir Tuesday.

In the 481-page book, Decision Points, Bush shares his thoughts on the 9/11 attacks, Hurricane Katrina and what he calls the "worst moment" of his presidency.

The 43rd president also takes responsibility for giving the go-ahead for waterboarding terror suspects, which has touched off a new round of criticism of Bush and calls for his prosecution. He says that he decided not to use two more extreme interrogation methods, but he does not disclose what those were.

As a presidential commission continues its investigation Tuesday into the Deepwater Horizon explosion and ensuing oil gusher in the Gulf of Mexico, the rig's work schedule will be a top concern.

"There seemed to be a compulsion to get this rig completed in that April 19-April 20 time period," said Bob Graham, the commission's co-chairman.

The commission opened two days of new hearings on the disaster on Monday. Graham questioned why the timing was "so central" to managers that they did not examine the well's cementing job more closely.

"I would hope that tomorrow (Tuesday) we get down to the question of just what was driving for a decision on that particular narrow 24 hours," said Graham, a former U.S. senator and Florida governor.

Votes and violence in Myanmar

Word started leaking out Tuesday about the results of Myanmar's controversial weekend elections, though the country's military regime had yet to announce any numbers.

"I believe that the [military-backed Union Solidarity and Development Party] could win between 80 to 90 percent of the whole parliament. And each smaller party would get a few seats in order to make the parliament look like a true multiparty parliament," said an independent candidate who competed in the Yangon area.

President Obama on Tuesday denounced the recent elections in Myanmar, saying they were neither free nor fair.

He also said all political prisoners, including opposition leader Aung San Suu Kyi, should be released from Myanmar's prisons.

Meanwhile, thousands of refugees have begun voluntarily returning to Myanmar from Thailand after learning that fighting between Myanmarese government forces and a splinter rebel group has wound down, the Thai military said Tuesday.

MSNBC primetime host Keith Olbermann will be back on the air Tuesday night after missing a couple of nights of work for violating the ethics policy of the cable network.

Olbermann was suspended Friday after Politico reported that he had donated to three Democrats seeking federal office.