The FBI recovered 11 sets of classified documents from its search of Mar-a-Lago earlier this week, including some aâ€twitter.com/i/web/status/1â€¦tO

Poliovirus has been detected in wastewater samples in New York City, suggesting likely local circulation of the virâ€twitter.com/i/web/status/1â€¦GJ 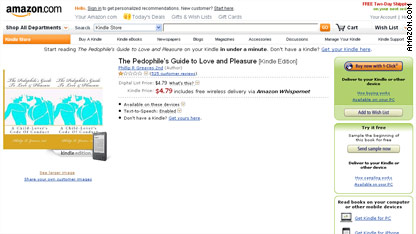 A listing for 'The Pedophile's Guide to Love and Pleasure' is no longer on Amazon.com.

[Updated at 10:47 p.m. ET] The listing for "The Pedophile's Guide to Love and Pleasure: A Child-Lover's Code of Conduct" is no longer available on Amazon.com. The title still appears in Kindle's Top 100 Paid Bestsellers at number 96, with 2,066 comments.

An e-book for sale on Amazon.com that appears to defend pedophilia has sparked hundreds of angry user comments and threats to boycott the online retailer unless it pulls the title.

Nearly 1,700 users who had commented on the title as of 9:40 p.m. ET deplored its publication and vowed to boycott Amazon until it removes the self-published title from the site. At least two Facebook Â pages have been set up dedicated to boycotting Amazon because of the book.

The author of "The Pedophile's Guide to Love and Pleasure: A Child-Lover's Code of Conduct" said he published the controversial tome to address what he considers unfair portrayals of pedophiles in the media.

"True pedophiles love children and would never hurt them," Phillip R. Greaves II said in a phone interview with CNN on Wednesday.

When asked if the self-published e-book was a "how-to manual," he said, "there are certain parts that are advisory," which set out lines that should not be crossed.

"Penetration is out. You can't do that with a child, but kissing and fondling I don't think is that big of a problem," he said.

The Pueblo, Colorado, man told CNN that he has not had sexual contact with a child as an adult, but did when he was a teenager. He also said he "was introduced to oral sex when I was 7" by an older female but did not provide specifics.

In the title's Amazon.com product description, Greaves described it as "my attempt to make pedophile situations safer for those juveniles that find themselves involved in them, by establishing certian [sic] rules for these adults to follow.

"I hope to achieve this by appealing to the better nature of pedosexuals, with hope that their doing so will result in less hatred and perhaps liter [sic] sentences should they ever be caught," he said.

Most users who commented on the title said they deplored its publication and vowed to boycott Amazon until it removes the title.

"It is ILLEGAL to molest children, and for Amazon to promote such is insane. I'm an abuse survivor, and am OUTRAGED Amazon would choose to promote this nonsense. I will not be purchasing anything from your website until this is removed," one user wrote in a comment echoed by others.

Others lamented they could not give the book less than "one star" in submitting their reviews, saying they would shop elsewhere during the holiday season.

"Cannot believe that Amazon is selling this. I was in the middle of placing my whole Christmas shopping order when I saw something about this. After reviewing it, I have canceled my order from Amazon and am encouraging all of my friends not to order from Amazon because they are choosing to sell this book. I will not be purchasing anything from Amazon until they agree to quit selling this book," another user said.

Amazon did not return CNN's requests for comment, but one user posted what it said was Amazon's response to an e-mail the person had sent.

"Let me assure you that Amazon.com does not support or promote hatred or criminal acts; we do support the right of every individual to make their own purchasing decisions."

"Amazon.com believes it is censorship not to sell certain titles because we believe their message is objectionable."

The company's website provides content guidelines for titles sold through its Digital Text Platform Program. The guidelines say publishers are expected to conduct proper research to ensure that titles are in compliance with all local, state, national and international laws.

Pornography, offensive material and "titles which may lead to... illegal activity" are among the prohibited content listed in the guidelines.

What Amazon deems offensive, "is probably about what you would expect" the guidelines state, without elaboration, except to say that, "Amazon Digital Services, Inc. reserves the right to determine the appropriateness of Titles sold on our site."

A few Amazon.com users defended the author's right to free speech, and a discussion on the site titled "Why Amazon is Right" delved into the constitutional implications of the controversy.

"While I think 99.9 percent of us object to pedophilia (even though I think this particular book was a publicity stunt/joke), I think we can all agree that we don't want someone else censoring a subject matter that we may be interested in. Religion, atheism, homosexuality, etc. are some subjects that spring to mind ... and they have been censored in the past until we realized that it's best to let all information in (even if we don't like some of it), rather than allow some authority or individual decide what we can and can't know about based on their own opinions or motivations," one user wrote.

The author has three other titles on Amazon.com under his name. They are available on the e-reader, Kindle, and all were published within the last week.

Greaves described himself as a former nurses' aid and in-home health care provider who is retired and on disability for "manic depression." He said he first began writing as a child and hopes to continue doing so full time.

But conspiracy theories over the book abound, with commenters citing it as a publicity stunt, a hoax, or perhaps a law enforcement sting.

The House has passed Democrats' sweeping health care and climate bill, which now goes to President Biden to be signâ€twitter.com/i/web/status/1â€¦QK
cnnbrk

5:50 pm ET August 12, 2022 RETWEET
RT @CNN: The US District Court for the Southern District of Florida has unsealed the search warrant and property receipt from the FBI searcâ€¦
cnnbrk

3:49 pm ET August 12, 2022 RETWEET
One week after a fiery car crash, Anne Heche is "brain dead" but remains on life support, according to a statementâ€twitter.com/i/web/status/1â€¦Mk
cnnbrk

3:15 pm ET August 12, 2022 RETWEET
The FBI recovered 11 sets of classified documents from its search of Mar-a-Lago earlier this week, including some aâ€twitter.com/i/web/status/1â€¦tO
cnnbrk