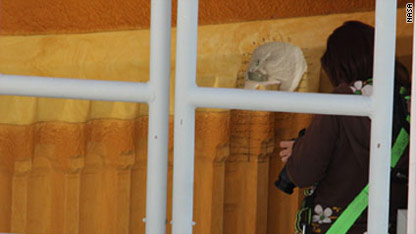 A technician examines the area of the external tank where foam was removed Wednesday.

The roughly 9-inch-long cracks were found on the tank's exterior stringers Wednesday, days after a 20-inch crack formed in the tank's foam insulation as workers were draining the tank following Friday's scrubbed launch attempt. Technicians found the cracks on the stringers as they were removing the insulation, NASA said.

Stringers are vertical, composite aluminum ribs on the tank's exterior.

Engineers were reviewing pictures of the stringer's cracks to determine how to repair them. After the cracks are repaired, workers will reapply foam to the tank. No repair schedule was announced.

NASA previously said the next launch attempt wouldÂ happen no sooner than November 30. It's not clear whether the repairs will again push back the launch, which was scrubbed several times last week because of bad weather, gas leaks and electrical glitches.

The voyage is expected to be the last for Discovery as NASA prepares to retire the shuttle fleet.

Discovery's six crew members are scheduled to deliver a pressured logistics module to the International Space Station. The module will give the station more storage space.

Netflix says it has acquired the rights to Roald Dahl's stories and plans to create a "unique universe" of productsâ€twitter.com/i/web/status/1â€¦86
cnni

6:01 am ET September 26, 2021 RETWEET
UK start-up Small Robot Company is bringing autonomous farming to life with robots that can identify and preciselyâ€twitter.com/i/web/status/1â€¦PJ
cnni