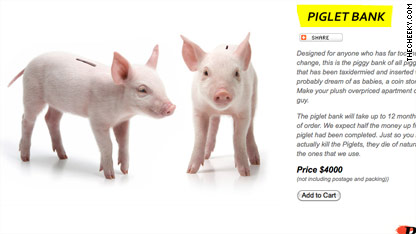 Thecheeky.com wants $4,000 for one of its Piglet Banks, which take a year to make.

Piggy banks have been used for centuries to save money, and more recently, to teach children the merits of saving portions of their allowances.

Thecheeky.com’s piggy bank is made of a real piglet, but fear not, pleads the site: The animals were turned into piggy banks after dying of natural causes.

“It’s a real piglet that has been taxidermied and inserted with what all piglets probably dream of as babies, a coin storage unit and a cork plug,” the Vancouver-based site said, using an altered photograph of a live piglet in its pitch.

The pig takes a year to make after it is ordered, and thecheeky.com wants half of the asking price - $2,000 – up front.

The Winnipeg Humane Society is not amused and is calling for a letter writing campaign to Vancouver Magazine, which recently ran an ad for the piggy banks.

“While animals are routinely killed for their meat and hides, this is a particularly callous and demeaning exploitation of a baby animal's dead body. It trivializes the life (and death) of a sentient being,” the animal rights group said on its website.

The Vancouver Sun’s Peter Fricker explored why the pigs are offensive in an article last week and eventually sided with the Humane Society’s - after playing devil’s advocate.

“I suppose it could even be argued that the taxidermied piggy bank is at least honest about its origins.  Unlike your animal-derived purse or wallet you have to look the product in the face,” Fricker wrote. “But somehow taking the dead bodies of baby pigs and turning them into novelty gifts for rich people to put their loose change in seems especially indecent.”

The Sun linked out to the British Columbia Agriculture Ministry site, which explains the breadth of products derived from pigs.

Colin Hart, who told The Toronto Star that he created thecheeky.com for his more outrageous ideas (such as suitcase stickers designed to make your luggage look like it contains a body or bricks of cocaine), seemed surprised by the backlash.

“Most people understand it’s a bit of a joke,” he told the newspaper. “We’re not harming any animals. We’re not even considering it. It’s quite ridiculous what’s happening.”

Hart, 34, told The Sun he was receiving hate mail and death threats, despite having yet to sell a Piglet Bank.