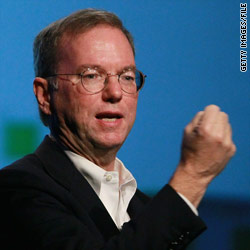 The Google CEO wrote in an e-mail to employees that the company wants to lift morale. What better way than with across-the-board pay raises?

Beginning in January, every Google employee on Earth – that’s about 23,000 folks – will receive a 10 percent raise, according to media reports.

That’s not all, though. Business Insider reported that employees will also receive a raise equivalent to their annual target bonus and performance-based “merit increases.” If that isn’t enough to give you employer envy, Google is also paying the taxes on its employees’ $1,000 holiday bonuses.

Business Insider, which printed an e-mail it believes to be from Schmidt to employees, reported the CEO also said a recent survey showed employees valued salary more than other components of their pay so a portion of their bonuses is being moved to their base salary.

“Googlers, you are what makes this company great, and our goal here is to recognize you for your contribution, in a way that’s meaningful to you. Thank you for all that you do, and for making Google a place where magic happens,” Schmidt reportedly wrote.

The Wall Street Journal reported that the pay hike is an attempt to stave off competition for its talent, especially from Facebook Inc. About 10 percent of Facebook’s workers are Google veterans, it said.

While the raises are sure to be a hit with Google’s workforce, the newspaper said that they are also sure to raise concerns among investors about Google’s expenses.

It’s difficult to estimate what the raises will cost the search giant, but the holiday bonuses alone will run more than $20 million.

She knows publishing, but what does the Hearst Magazines chairwoman know about running one of the world’s largest school systems?

That is the question some New Yorkers are asking, and Mayor Michael Bloomberg has yet to expand on his rationale for hiring a publishing executive to succeed Joel Klein as chancellor of the NYC School Board.

"Cathie Black is a superstar manager who has succeeded in spectacular in the private sector," Bloomberg told a local station. "She is brilliant, she is innovative, she is driven - and there is virtually nobody who knows more about the needs of the 21st century workforce for which we need to prepare our kids."

As Forbes points out, she has no background in education, she has never worked in government and she didn’t send her own children to public school.

At Hearst, according to her bio, she oversaw 200 international editions of 14 magazines, including Cosmopolitan, Esquire and Harper’s Bazaar. She also is a board member at IBM and the Coca-Cola Co., a former chair of the Magazine Publishers of America, a trustee at the University of Notre Dame and a member of the Council on Foreign Relations.

The 66-year-old businesswoman, who has been dubbed “The First Lady of Magazines,” will be the first woman to head the nation’s largest school system, and she told The New York Times she was excited by the chance to “make a difference in the lives of our young people.”

She will have plenty to prove in the public sector, and The Times reported she also has a lot of people to meet. A senior education official told the newspaper the department’s leaders learned of Black’s selection just before it was announced and that few seemed to know much about her.

The Canadian folk singer wrote a haunting ballad about a legendary shipwreck, but he's something of a legend himself.

"The Wreck of the Edmund Fitzgerald" culminated a string of hits that populated U.S. music charts in the first half of the 1970s: "If You Could Read My Mind," "Sundown," "Carefree Highway" and "Rainy Day People" were in heavy radio rotation before "Wreck" told the true story of a freighter's mysterious demise during a historic 1975 storm on Lake Superior.

Wednesday is the 35th anniversary of the infamous sinking.

Lightfoot was respected by musicians and well-known in Canada in the '60s. Several of his songs were recorded by big acts like Peter, Paul and Mary, Chad and Jeremy, the Kingston Trio and Judy Collins.

Most notable among those songs were "(That's What You Get) For Lovin' Me," "Did She Mention My Name?," "Early Morning Rain," and "I'm Not Saying."

The publicity-shy singer, who was the subject of a Twitter hoax claiming he was dead earlier this year, has won numerous awards in Canada and has been nominated for four Grammys. Lightfoot, who will turn 72 next week, is planning a Canadian concert tour next year.